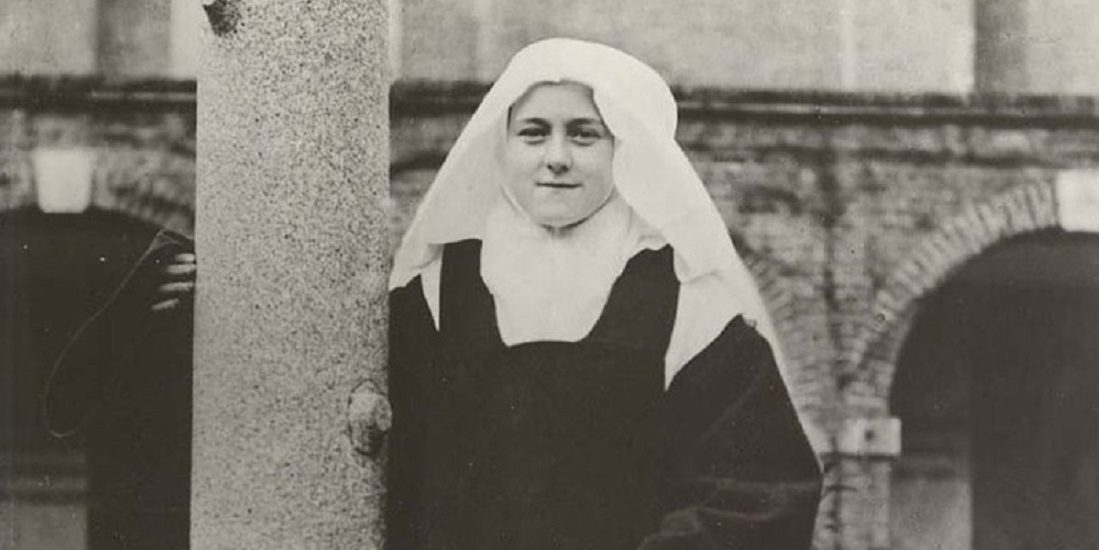 Thérèse of Lisieux, as you may know, is one of only three women to have been made a Doctor of the Church. Her mother died when Thérèse was 4. One by one, her four older sisters left for the cloister. She became emotionally clingy.

A key moment in her spiritual development occurred on Christmas eve of 1886. She called it her “second conversion.”

The French custom at that time was for the children to leave their shoes by the fireplace for the parents to fill with candy. As the youngest of the Martin daughters, Thérèse—13 at the time—was the last to keep up the ritual. Returning from midnight Mass that night her father, tired and uncharacteristically cranky, passed the pair of filled shoes and remarked: “Well, fortunately this is the last year.”

Thérèse overheard and began to run up to her room. Her impulse was to burst into tears and made a scene. Instead, halfway up the stairs she paused, willed herself to smile, turned, marched back to the parlor, embraced her father and opened the presents with good cheer and thanks.

“On that night of light the third period of my life began, the most beautiful of them all, the most filled with graces from heaven,” she wrote in her spiritual biography, The Story of a Soul. “I felt a great desire to work for the conversion of sinners, a desire that I had never felt so strongly…In a word, I felt charity enter into my heart, the need to forget myself in order to please others, and ever afterward I was happy!.”
Happy in spite of almost constant aridity, a frightful dark night of the soul, and an agonizing death from complications of TB—with no pain medication—at the age of 24.
Br. Joseph Schmidt, FSC, author of two penetratingly insightful books about Thérèse, points out that Thérèse turned that night from a neurotically needy schoolgirl to a mature woman with a profound capacity for authentic love. He maintains that Thérèse’s journey was through what today we’d call codependence, and that her recovery was based on a recognition of the utter nonviolence of God’s love.

Here’s an excerpt from Walking the Little Way of Thérèse of Lisieux:

“Thérèse’s spirituality in particular shines the Gospel light on the violence hidden in Jansenism, perfectionism, and Pelagianism. These errors poisoned the spirituality of Thérèse’s day and continue in various forms to contaminate religion in our own time….Specifically, she rejected violence, not violently but by being more and more available to the source of love. She resisted violence and subverted it, serenely bearing its pain, resisting its contamination, opening herself more fully to God’s love, and quietly living and teaching her little way of love.”

Thérèse’s path was not terribly glamorous. She was stuck in a freezing cold cloistered convent with bad food, no spiritual peer, and a nun behind her in chapel who made a horribly annoying sound, “like two shells rubbing together,” apparently by clicking her rosary against her teeth. Thérèse trained herself by the strictest discipline not to turn around and glare at the woman. What purpose would that small act of emotional violence have served except to telegraph to the nun that Thérèse found her substandard?

Our paths aren’t terribly glamorous either. We live in a culture that mocks our faith and is saturated with violence. We have abortion, we have massacres of schoolchildren, we have nuclear weapons that are capable of destroying the planet.

And what is the antidote? Love. The antidote is to treat the crotchety old nun, the borderline personality, and your neurotic Superior, who may very well be your spiritual inferior, like Christ. That is the orientation of heart from which all peace-making efforts must spring. Like Thérèse in her cloister, we get to be hidden in plain sight. We get to make the smallest moment of our lives sacramental. We offer our little acts of self-denial, our prayer, our sorrows, our sacrifices, our tears, our vigils, for some, our solitary incarceration, and let Christ do with them what He wills.

In this era of rampant self-promotion, it’s also worth remembering that millions of people know Thérèse now, but no-one knew about her when she was alive. Even after her death, within the convent the general tone was: She’s a saint?

But read Br. Joseph’s book. It will give you a whole new appreciation of the crazy paradox that this bourgeois French schoolgirl became one of the most important spiritual figures of our time. It will give you a whole new sense that your own outwardly meager, mostly unseen, tragicomic journey will somehow, someday, bear fruit. It will make you really, really, grateful for central heating and morphine.

And on Christmas eve, the holiest of holy nights, may charity enter our hearts as well.