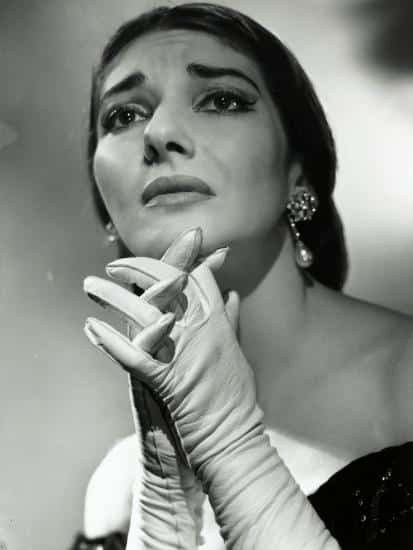 MARIA CALLAS
"I WOULD NOT KILL MY ENEMIES, BUT I WILL MAKE THEM GET DOWN ON THEIR KNEES. I WILL, I CAN, I MUST."

I’m enthralled by the late opera singer Maria Callas—her voice, her life. I also have a thing for the somewhat obscure German contralto Emmi Leisner (1885-1958). But perhaps like many of us, I’ve always thought of opera as a high-brow version of the musical, which, with the exception of Fred Astaire movies, I pretty much can’t stand.

But the real deal, I have to admit, is I’m cowed by opera. I’m afraid I don’t know enough about music to “get” opera.

That was before I went to a recent luncheon talk given by the Australian theater and opera director Barrie Kosky.

Kosky made his U.S. debut last year at the L.A. opera with Mozart’s The Magic Flute.

He’s back again this season with a double bill: Henry Purcell’s Dido and Aeneas (1689), and Béla Bartók’s Bluebeard’s Castle (1911).

For those who’ve forgotten (or never known) the stories: Dido, Queen of Carthage, is married to and adores the Trojan hero Aeneas. When she suspects he will abandon her, she despairs-unto-death.

Judith and Bluebeard, a wealthy nobleman, have just eloped. When they arrive at his dark and cavernous castle, Judith finds seven locked doors. Bluebeard says, “Don’t ask me to open them.” Judith insists.

He had me on “obsessive love.” But how did he come to put together two operas that were 222 years apart?

He decided not even to try to make any connections between the two pieces. “If there are connections, and associations, and resonances, and echoes, let that be from the audience.  Let’s find two different worlds, two different landscapes on the stage, and see what happens.”

“We started with Bluebeard. I said ‘No walls, no doors. This is not about architecture, this piece.’ It’s about two people. Alone. We developed the idea that the doors and the walls are their bodies.”

Kosky describes himself as an “opulent minimalist.” The opulence is in the emotion. “Opera is about hearing and seeing a ritual of what happens when character and emotion are produced through human anatomy. Muscles contract and expand and push against each other with air to produce a sound. Mostly with no amplification. In front of an audience. Live. This is a very primal thing.”

“Claudia [Mahnke] and Robert [Hayward]perform Bluebeard  with a physicality I’ve rarely seen on the stage. It’s Who’s Afraid of Virginia Woolf in Hungarian.”

“Dido is about a different kind of claustrophobia and loneliness. She’s surrounded by all these people: her court, her friends, her lover. And yet she’s lonely. She’s haunted from the very beginning by the thought that something’s going to happen and Aeneas will leave her.”

Who hasn’t experienced a fear of abandonment so intense that you’ve subconsciously brought the abandonment to pass? What human being over the age of thirteen can’t relate to the iconic aria “When I Am Laid in Earth” aka “Dido’s Lament”?

When it’s right, Kosky insists, opera is the greatest art form. “It combines music, theater, sculpture, visual arts, light, performance, audience. Live. What other form of art does that? And tells stories, too.”

“The singers have to get it through their bodies. The whole point is to hear the human voice travel through space. That’s opera. That’s the magic and joy of it. And it’s difficult. But that’s what we fight for.”

“When I work on a piece, I digest it. Then I vomit forth [i.e. offer forth] something. That’s what performers do, too. It’s a process of osmosis. Everything’s taking in and giving out.” The Eucharist! I’m thinking.

“The concentration shouldn’t be on the sound. The work of the singer is to get that sound through the word—not on top of the word, but through the word–to convey the meaning of the text.” The living water of the Gospels! I think.

As if reading my mind, Kosky continues: “There’s something religious about opera. It came out of the same traditions. There always has to be a mystical allure, something unexplained. And if you try to articulate it too much, you end up destroying it.”

The opera’s expensive. But balcony seats are as little as $17. Rush tickets are available for students and people over 65. Or maybe after reading this you’ll want to save up and splurge.

And Kosky won me over completely when he validated my instinctive love for Maria Callas.

“This idea of ‘beauty’ is not about a beautifully-sung tone all the time. Maria Callas is a perfect example of someone who produced excruciating sounds that were also genius—sometimes not intentionally. But give me Maria Callas any day over thousands of impeccably-trained, tasteful singers. I don’t think that’s got to do with taste. I think it’s got to do with emotional truth.”

One Reply to “A NIGHT AT THE OPERA”