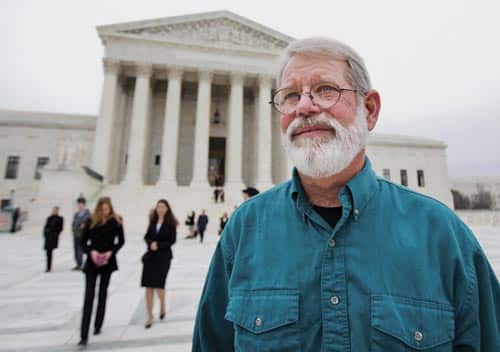 John Dennis Apel, stands in front of the Supreme Court in Washington, Wednesday, Dec. 4, 2013, following an argument on the right to protest at a military base. Apel had been barred from entering any part of Vandenberg Air Force Base on the central California coast, including the protest area on a public highway that passes near the main gate. (AP Photo/Manuel Balce Ceneta)

Dennis Apel and his wife Tensie Hernandez started the Guadalupe Catholic Worker in 1996. Supported solely by donations, they distribute food and clothing to the farm workers of the Central Coast. They operate a free clinic. And from the beginning, vigiling at nearby Vandenberg  Air Force Base has been part of their practice.

Guadalupe is a tucked-away town in Santa Barbara County, 175 miles from the downtown L.A. Cathedral and still within the archdiocese.

From Beatitude House, Dennis says: “The base calls what we do protesting. We call it vigiling. Vigiling is a sitting with, a being with while you’re waiting for something to change. Generally our signs would be non-confrontational. The biggest banner we have says, “Have Our Weapons Brought Us Peace?”

We’re just trying to shed a little light on what goes on at Vandenberg. Just one of the things they do is test intercontinental ballistic missiles (ICBM’s). An ICBM is designed and built for one purpose: to deliver a nuclear weapon anywhere on the globe within a half hour. We have over 300 on alert in the mid-section of the United States. About five times a year, they take one out of its silo, bring it out to Vandenberg, take the warhead off, put what they call a dummy warhead on it, and they try it. Does this work? Well it’s worked now for decades. The real point is the world gets to know that we have an ICBM that works every single time. And don’t forget it.

Every time Vandenberg fires off an ICBM the windows in our house rattle. It takes twenty minutes for that missile to travel 4200 miles and deliver its warhead to the lagoon in the Marshall Islands’ Kwajalein Atoll we use for target practice. In that twenty minutes, another $50 to $100 million is spent.

Folks sometimes say: ‘I don’t get it.  What is the connection between pro-testing ICBM. launches at Vandenberg and doing service for the poor in Guadalupe?’

Our country spends more on defense than all of our allies put together—over $600 billion per year. Maybe there is no connection between our military budget and the increasing economic disparity in our society, the ‘war’ economy and the ‘poor’ economy. Maybe our dependence on bigger weapons and longer, messier wars has no connection to our rapidly deteriorating ability to be human in our interactions with our neighbors.  I don’t know.  But having  long ago set out on the path of service and resistance, it seems late in the game to turn around now.”

Vandenberg is a closed base meaning permission is required to enter. However, past the main gate runs Pacific Coast Highway, the same Highway 1 that runs the length of California.  Everyone agrees U.S. 1 is a public way, but fourteen miles of it runs through property that’s owned by the base..

Dennis continues:  “I’d been arrested and gone to federal court many times for vigiling outside the main gate of Vandenberg. The question became: How much authority does the base commander have over the public highway?  A highway patrolman can’t tell a citizen they can’t stand on Highway 1 with a sign. A sheriff can’t. Why can a military commander? The case went higher and higher on appeal and was eventually accepted by the U.S. Supreme Court. Erwin Chemerinsky, an icon in the world of Constitutional Law, offered to argue, in essence, that the base commander’s authority can’t override a citizen’s First Amendment right to vigil on a public way.”

Because of the generosity of their supporters, the whole community—Dennis,  Tensie, their daughter Rozella, then 14, their son, Thomas, then 12, and Jorge Manly-Gil—were able to travel to Washington, D.C. last December for the hearing.

“What an eye-opener!  I imagined that the highest court in the land would be interested, above all, in preserving the Constitution.  Instead, Erwin Chemerinsky repeatedly tried to raise the First Amendment issue and was told: ‘You can bring it, but that doesn’t mean we have to listen to it!’

To watch some of the Justices leaning back in their high-top leather chairs, whispering to each other and laughing while oral arguments were conducted, to see the genuine disinterest for the issues in the case that had been hammered out in months of research and discussion, was a real loss of innocence.

The kids will probably survive.  I pray that I will.

If you have a deep faith in love and life and good, you come to believe you have a purpose and a responsibility. You allow your body to be used as a force for life and love in a world where so many bodies are becoming instruments for death and destruction.

What did Christ do that he had to die? He didn’t kill anybody. He didn’t start a revolution. All he did was speak some truth. We don’t want to allow death and destruction to have the final word.”

The Supreme Court decided 9-0 in favor of the base commander’s authority over the public highway. The separate First Amendment issue of a citizen’s right to stand on the public highway outside a military base with a sign will be heard by the 9th Circuit of Appeals. On September 3, Dennis was again arrested for vigiling outside Vandenberg.