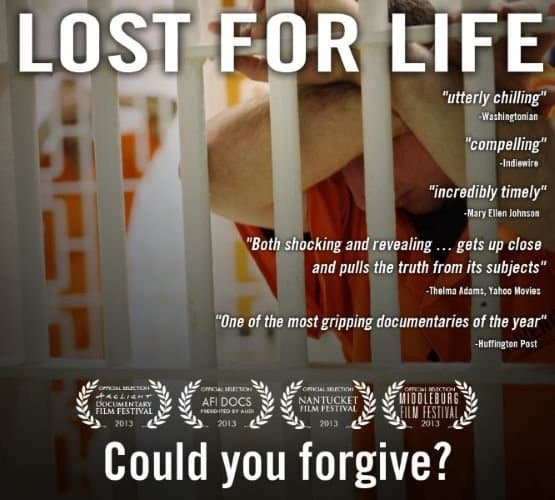 Jacob Ind underwent horrific sexual and emotional abuse at the hands of his mother and stepfather. At the age of 15, he murdered them both.

Brian Draper and Torey Adamcik were small-town Idaho teens. In 2006 they donned masks, drove to the residence where classmate Cassie Jo Stoddart was housesitting, and brutally stabbed her to death.

These are just three of the over 2500 prisoners who have been sentenced as juveniles, some as young as 13, and are serving life without parole in American prisons.

They are also three of the men profiled by local documentarian Joshua Rofé in his riveting 2013 documentary Lost for Life.

“Could You Forgive?” reads the tagline for the film and to his credit, producer and director Rofé leaves us to decide. He shows the minds, hearts, and in some cases, the transformation of the prisoners. But neither does he stint on the horror of the crimes, the devastating trauma suffered by the victims’ families, and the fact that forgiveness is a long, arduous journey.

Josh sat down with me at Fix Coffee in Echo Park recently to talk about the making of the film.

I ended up throwing out my first two and a half years of footage. If you’re not willing to discuss your crime which, let’s be honest, left a dead body in its wake, there’s no story. You’re a liar. But in June, 2011, I found people who were willing to dissect themselves and their circumstances. Almost everything that’s used in the film comes from that one month.  Most of these inmates have had traumatic childhoods. Then they commit these horrible murders, which is another trauma. So the vast majority are completely shut down. They’re not able to admit to their crime and they’re even less able to describe or process it. Which makes the fact that these guys did speak about it that much more impressive.”

One of the most gripping moments in the film is when Brian Draper—sweating,  visibly shaken, five years after the crime—says  haltingly, “I owe a tremendous debt to Cassie Stoddart. The only way I can even start paying that is to first of all tell exactly what happened to her and to not dishonor her in anything I do in my life.” He doesn’t use the terms, but his change of heart is to me the essence of penance, redemption, atonement.

“He’s had an awakening. He understands that the rest of his life will be defined by whether or not he lives in a way that honors Cassie Stoddart’s short life, or whether it desecrates it. This should be of particular interest to your readers. Because what does religion ask us to do? To examine ourselves, to try to make peace with the wrongs we’ve perpetrated, to make them right. And also to ask ourselves: Could we forgive?

Sharletta Evans’ three-year-old son was killed in a gang shooting. Religion did bring her to forgiveness. It took about fifteen years. The reason I’m so fascinated by her is I don’t know if I have that in me. What if someone killed someone I love? I have moments when I think maybe I could do what she did. But most of the time I think forgiveness would probably be beyond me. So then I have to wonder, What does that say about me and where I am in my life?”

I’m thinking of the Sermon on the Mount. Until you’ve seen what you’re capable of, you just go around thinking ‘I’m good and you’re bad.’ Sharletta’s forgiveness came when her surviving son reached the age 16, the approximate age of the shooters when they killed her three-year-old. She thought, That could have been my son.

“To come to terms with what you’ve done, you have to begin to feel empathy for someone. Jacob Ind was 15 when he killed his mother and stepfather. For the first eight years he was in solitary, wallowing in self-pity and anger. Then he, too, began to have an awakening.”

That’s another incredible moment—when Jacob says, “It took close to a decade before I could have the strength to stop and say, “No. My fault.”

He eventually realized that his mother had herself come from a long line of abuse, and that there’d probably been generations before that.”

What are you working on now?

A documentary called “Swift Current.” It’s about Sheldon Kennedy, a Canadian hockey player who was abused by his coach. He talks about the long-term effects of childhood sexual abuse in a way no-one else to my knowledge ever has on film.

We look forward to it.

Lost for Life is available on iTunes.

One Reply to “LOST FOR LIFE: DOCUMENTARIAN JOSHUA ROFÉ ON JUVENILE LIFERS”