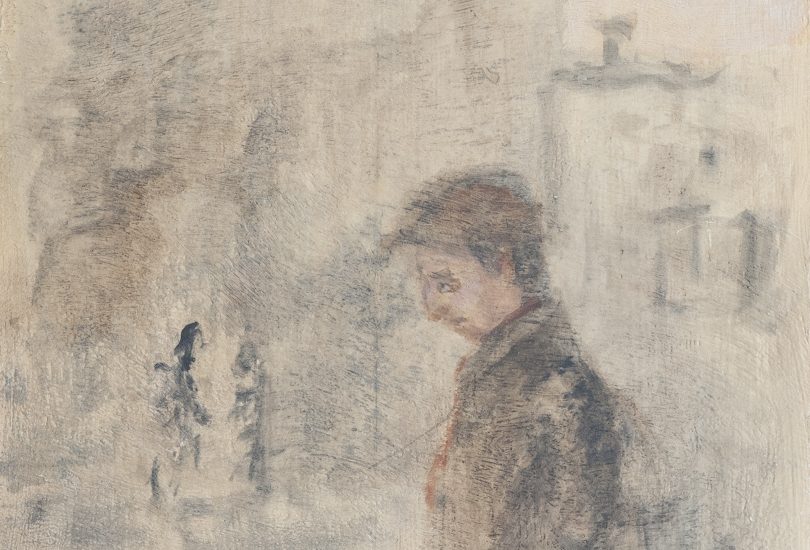 It is a terrible misfortune when there is not to be found one really interior soul among all those at the head of important Catholic projects. Then it seems as though the supernatural had undergone an eclipse, and the power of God were in chains. And the saints teach us that, when this happens, a whole nation may fall into a decline, and Providence will seem to have given men a free hand to do all the harm they desire.
— Jean-Baptiste Chautard, The Soul of the Apostolate

You may remember Matthew Kirby, the wonderful painter from Brooklyn whose work I featured a while back.

Matthew’s a walker. Recently he sent me this email, and a painting inspired by the story he told in it.

“Quick story: I spend a lot of time walking around my Brooklyn neighborhood running errands and I noticed another walker, a small, gaunt man dressed in slightly rumpled clothes with an Irish-style cap that buttons in the front and thick, obscuring lenses in his glasses. By my calculations, his walks – one around 8:00 in the morning and a return trip around 3 or 4:00 in the afternoon – take him over two miles each.

But what’s remarkable about him is that he pulls down, rips up and throws in the trash just about every leaflet, business card, menu and glued or stapled-on advertisement he finds along the way. For a while he had a heated battle with some large, close-up, hi-res images of faces in states of self-conscious imitation rapture that a local sex implement shop had been gluing up on the plywood walls of a renovation site. Every other day new posters would be put up, and then scratched down with what were clearly human fingernails.

At first it took me a while to realize that he was not picking up trash – which many well-meaning homeless or jobless people in the city do unbidden and unrewarded – he was systematically cleaning his route of the inane messages and images of advertising. He does it with visible irritation, but not rage (he’s a conscious pedestrian and stays out of other people’s way to the point of making himself unseen), and I came to admire him for it.

So one day I was at Mass, not at my usual time, and I turned around pass the sign of peace and there he was. He let me know, in a way that wasn’t at all rude, that we was absolutely not going to take my automatically extended hand (which is always more than fine with me.) But I was able to see his face more clearly this time and could tell that he was a suffering rather than just cranky person. It was not the face of a crusader or moralist, but of someone who was just trying to protect himself from all the impersonal, talky, fake-chummy, lethal messages and images in the world. And I remember that he sang quite well and said the responses firmly and un-selfconsciously.

I have seen him less and less since then and I know nothing else about the man. I have no reason to think he’s any more or less mentally ill than anyone else at Mass or in the streets of Brooklyn. Maybe he could give an articulate reason for what he does; maybe not. But I can’t help but think that he is really is one of the solitaries Merton describes, and that he’s living his solitude creatively, publicly, on the same streets we all walk on.

Here’s a painting semi-inspired by him, although it’s not intended as a portrait or even an illustration.”

2 Replies to “ONE REALLY INTERIOR SOUL: A STORY AND PAINTING FROM MATTHEW KIRBY”