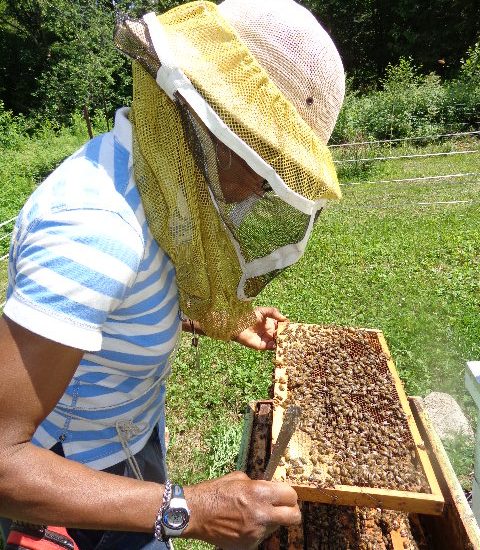 ANDORRA HOWARD WITH HER BEES

Earlier this year, I visited Madonna House: the lay community in Combermere, Ontario, founded by the late Russian emigré and mystic Catherine Doherty.

Life at Madonna House is deeply incarnational. Members grow their own food, cut their own wood, make their own altar cloths, candles, icons. My last day there, Andorra Howard, a community member for thirty years, took me to see the bees she tends and loves. As she worked, she told me some of what she’s learned.

“I’ve been the “official” Madonna House beekeeper for three years now. The job has been one of the most wonderful, fulfilling, and challenging of my apostolic life.

When I was first asked to look after our hive I spent a day with our local bee inspector to learn beekeeping. He never worked with gloves and sometimes without even a veil! He told me that I could use gloves but that the bees didn’t like them and that you squished more of them that way. So I decided to try working without gloves, too. Whenever I got a couple of stings the fear would rise and I would run to protect myself, but the gloves always seemed to make matters worse, not better. The bees got angrier at the intrusion and I got more frustrated with my clumsiness.

Also I began to realize there was a world literally at my finger tips that I would never enter unless I made myself as vulnerable to the bees as they were to my intrusion.

Deeper still, I realized that God has created a harmony, a peace, an order that Nature expresses and obeys. Nature doesn`t rebel against God; Nature obeys Him. Where that order still exists—where man has not destroyed it—you literally can enter into in and feel it.

I have often thought around the bees, “This must have been what Eden was like, this harmony, this lack of rebellion in my nature and in all nature around me.”  It`s beautiful! And it has nothing to do with ME! I have to bow to something that is taking place and respect the bees, their home, the order of their life. I know that if I wear gloves they can`t “get at me.” But then I can never feel them either. One time, the bees were tracking the queen’s scent and my hand was literally covered with their soft, fuzzy bodies; vibrating with the beating of their wings! It was exhilarating! It was fascinating! I was lost in this moment! You would never get that with gloves on!

The queen bee is the most important bee in the hive. The entire temperament and future of the hive belong to her. You get to know your queens pretty well. They all have personalities! You can get attached to them, proud of them, frustrated with them, too. One time I accidentally stepped on and killed a queen. I felt so bad! This queen had produced well, she was gentle, she deserved a better way to die than to be stepped on by some clumsy junior beekeeper. I know people may think it silly or sentimental but I picked that tiny queen up and I made a little hole with my foot and I buried her there.

We beekeepers all have a “way” that we keep bees. It`s not about a technique; it`s about a stance to life, a philosophy. Do I kill a queen just because she has some quirks that are harmless but that annoy me or make me work harder? Can I put up with that? Because if everything doesn’t have to be just the way I like it with an insect, then maybe I can be the same way with a person. Can I choose to be in the company of someone who annoys me? Can I stop wanting everyone to change to suit my needs? Can I have the same respect and delight for the people around me that God has for each one of us?

Think about a God who took time to create something that most of the billions of people on this Earth will never see! Think about Him looking down, seeing this tiny creature burrowing into a flower, enjoying the sun and the breeze and the nectar…and God smiling. Who am I to do otherwise?

Don`t get me wrong—these aren`t pets! They will sting me if they feel threatened! But when you passionately love something it`s worth it! I have the privilege to work with one of the most fascinating creatures God has ever created.”

I stood at a respectful distance, clad in a protective bee-keepers suit. The frames swarmed with bees. Andorra’s hands as she lifted them were gentle yet sure, careful but without fear, capable yet reverent. Where had I seen hands like that before? Then I realized they were like the hands above an altar. They reminded me of the hands of a priest as he changes the bread and the wine into the Body and Blood of Christ.

5 Replies to “MEDITATIONS OF A BEEKEEPER”