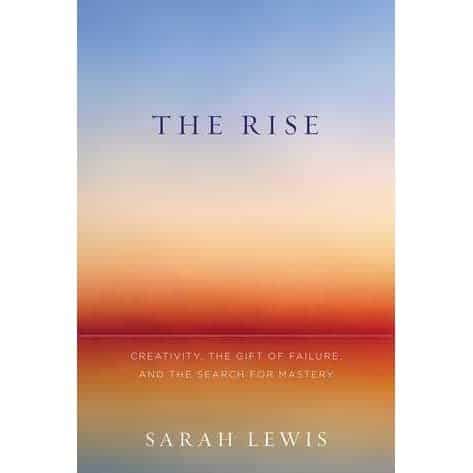 As a free-lance creative writer, I can hardly read enough about rejection and failure. So here’s a book that recently caught my eye: The Rise: Creativity, the Gift of Failure and the Search for Mastery.

Author Sarah Lewis rightly points out the danger of falling into a rut of the safe and the familiar. She beautifully articulates our sense that what we long to achieve in our creative endeavors lies forever just beyond our reach. She emphasizes that even spectacular setbacks can sharpen our resolve. Still, toiling away in my humble room, I couldn’t totally relate, career-wise, to some of the folks she profiles: Sara Blakely, the billionaire founder of “the girdle-refining line” Spanx; Andre Geim, the Nobel-winning physicist who managed the first isolation of a two-dimensional object (it’s graphene).

One of my favorite passages was about Ben Saunders, a Devon-born explorer who became only “the third person in the world to reach the North Pole solo and on foot.” After achieving this staggering feat, wanting to share his joy with someone, he warmed his satellite battery by tucking it under his arm and called his mother. Standing in line at the grocery store, too overwhelmed to speak, she began crying and asked him to call her back. So he called his girlfriend:  the message went to voicemail.

“After seventy-two days of trudging alone on the pack and pressure ice, at times swimming through the ‘inky black water’ of the Arctic Ocean over three miles deep,” Lewis observes, “he had not cheering squad, no flag to plant.”

Now that I could relate to. Because we are all, in our way, walking to the North Pole.

For a chapter entitled “The Grit of the Arts” Lewis interviews Angela Lee Duckworth, who works in the Positive Psychology Center at UPenn. Duckworth’s career began when she asked, “What are the true barriers to achievement?” In trying to explain how we can “sustain ability, capacity for hard labor, and zeal over time,” Duckworth and her colleagues “thought the missing variable was grit.”

Grit is not just “rugged persistence,” but rather “an often invisible display of endurance.” Grit is toiling away “over years, even decades”….and even without positive reinforcement.” Samuel Morse, for example, worked for twenty-six years to become a renowned painter, failed, then “took what he learned to pioneer the invention of the telegraph.”

That’s a beautiful achievement, as are most of the achievements Lewis describes in her very good and, for the most part, very interesting, book. They are also examples of failure on the way to mastery, success, and world-wide acclaim.

Nothing wrong with success or acclaim. But so obsessed is our culture with the idol of success that we can forget how very sharply that model departs from the message of the Gospels. So enamored are we with the notion of mastery that we may forget to stop and ask “Mastery over what? And for Whom?” As Nathan Heller observed in a July, 2012 New Yorker piece about the prevailing mood at a TED-talk conference, “It is the mood of professionals who wear Converse to work, own multi-million dollar homes at thirty-two, eat local, donate profits to charity, learn Mandarin, and rock-climb in the Pinnacles on Sundays. I

t is the friendly, self-effacing irony of winners.”

But what of failure that remains failure? What about failure on the way not to mastery but to a sham trial and death?

Fr. Alfred Delp (1907-1945) was a convert and a Jesuit priest who was arrested by the Nazis simply for being Catholic, brutally beaten, and relegated to a solitary cell with both hands shackled. Somehow, while awaiting trial, he managed to work one hand free and to write, among other things, letters, essays, reflections and a stunning series of Advent Meditations.

The new lawyer he lobbied for turned out to be virulently anti-Catholic. The heart-felt letter he wrote to the judge was taken as insolence.

But sentenced to death, awaiting execution, Fr. Delp didn’t waste his time hating. He hoped, he wrestled with his conscience, he asked forgiveness, he apologized to all those to whom he had been unkind, unfair, and prideful. He wrote, “I will honestly and patiently await God’s will I will trust him till they come to fetch me. I will do my best to ensure that this blessing, too, shall not find me broken and in despair.”

Fr. Delp was executed by hanging on February 2, 1945. The Nazis scattered his ashes over a manure field.

Reading The Prison Meditations of Father Delp in tandem with The Rise, it came to me that the hardest test ever devised for “ability, capacity for hard labor, and zeal over time” is to hold the excruciating tension between good and evil and not to break beneath it.

The pinnacle of human achievement is not mastery, but rather trust.

The greatest feat that can be achieved by a human being is to love one’s enemy.

That is a feat not susceptible to measurement by Positive Psychology.

That is a feat that goes beyond “grit” and enters the realm of the sublime.

That is a feat transcending any mere rise.

That is the Resurrection.

2 Replies to “BOOK REVIEW: THE RISE, CREATIVITY, FAILURE AND MASTERY”