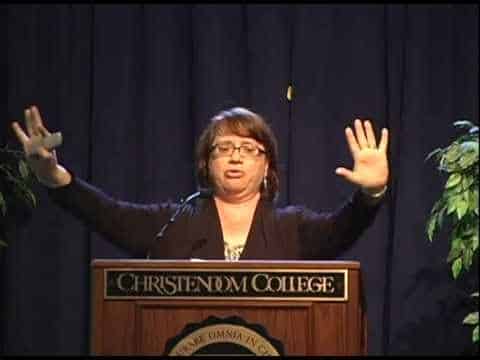 Barbara Nicolosi has worked in Hollywood since 1996 as a writer, producer, and production company executive. She’s also a blogger, speaker, Executive Director of The Story Institute at Azusa Pacific University, co-founder of Act One, a training/mentoring program for Catholic writers and producers.

You haven’t lived till you’ve seen Barbara, in full Mother Superior mode, giving a Power Point presentation on “then” and “now.” “The Church used to stand for something!” she hectors, pointing first to the score of Handel’s Messiah then, by contrast, to the lyrics of a contemporary hymn: “Our God Is an Awesome God.”

“I realized coming here,” she says, that it’s not that Hollywood was persecuting the Church as much as it was the Church was committing suicide in Hollywood. Big difference…I discovered Hollywood isn’t anti-Christian as much as it’s anti-bad art. The problem is that we’re giving Hollywood schlock.”

Via Affirmativa, a coalition of artists of faith, will hold a conference this year in Colorado Springs from July 18-20. The topic is DESIRE and DESIRE AS IT IS UNIQUE TO THE ARTIST.Barbara will be the keynote speaker.

Talk a bit about the artist as prophet.

I’ve been in the Archdiocese of of L.A. since 1996, and I don’t think I’ve ever heard in a  homily any mention of the fact that a huge percentage of the people in the pews are working in the arts and entertainment area. My whole life has been about trying to correct that a little bit. I want artists to know “We do value you; you’re important.”

Every age has to be producing art that speaks to its time and to the future. Jesus says, “Blessed are they who can take both the old and the new out of their storehouse.” A lot of people haven’t survived the fifth years post-Council in the Church with any kind of real….

Yes! They’re doing Eucharistic Adoration, they’re praying, they’re trying to define themselves according to their faith. What I’m afraid of is they think that in imitating the forms of the past they are grasping the values of the past. What does beauty in the 21st century look like? It doesn’t look like the Renaissance. We’re going to have to have our own Renaissance. We’re not talking about looking like Titian and Michelangelo and Mozart; we’re talking about the principles of beauty: wholeness, harmony and radiance. And then saying What does that look like today? We don’t know.

That’s where Via Affirmativa comes in?

Via Affirmativa is an opportunity for artists—writers, poets, painters, composers—to come together for a real, classical, retreat. With a schedule, a time of prayer and silence, and also talks geared toward the life of the artist.

I’m going to give two talks. One is “What is an artist and how do we shepherd them?” The Church needs to find people with talent and training. People who come to Via Affirmativa are very serious. If you ask what they do, they say, for example, “Painter.” They don’t say, “I’m an insurance salesman and I paint on the side.”  Artists are in a relationship with the beautiful. They’re pursuing what John Paul II called “new epiphanies of beauty.”

The second talk is on the spiritual challenges of being an artist: isolation, rejection, instability, moral and ethical dilemmas, especially in Los Angeles, collaboration, and finally, success itself.

The mark of a vocation, maybe, is that we’re willing to sacrifice for it.

The vocation of an artist has particular crosses. I’m able to say to artists if you’re suffering these things, that doesn’t mean you’re doing it wrong. Buck up. Find community; find strategies to keep walking. You can’t abandon writing because you don’t like isolation. You have to learn to deal with it.

I’m going to use Dante Alighieri’s Purgatorio. Dante puts the artist in purgatory, not hell, which is encouraging. I think he’s saying that artists are innately close to God because they’re going to suffer. They’re also going to have an innate humility, what John Paul II calls the “suffering of insufficiency.”  Artists are given a divine vision that they can never quite reach. That suffering is sanctifying.

Artists also have an innate sense of wonder. No-one knows more than the artist the spiritual dimension of art. Because where it comes from is a mystery.  The Catholic artist has a naturally sacramental vision for the arts. The sacraments are a unity of matter and form. So are the arts. There needs to be excellence of form and excellence of content. The lie about mediocre art is that God is mediocre.

You and I are both huge Flannery O’Connor fans. She so gets that aspect of Christ, of grace, that’s forever off-kilter.

We have a misconception now that we need to make propaganda for God as a response to the secular, world. It’s triumphalistic, rah-rah, our side is the winning team. It doesn’t bring anyone over at all. The response to left-wing, secular propaganda isn’t right-wing propaganda; it’s beauty.

The story is enough. The story is going to take people on a journey that will crack through their prejudice. People of faith have no faith in people. They don’t believe in that mysterious process. We don’t need to tell people what to think. All we need to do is get people to a question that they haven’t asked before.