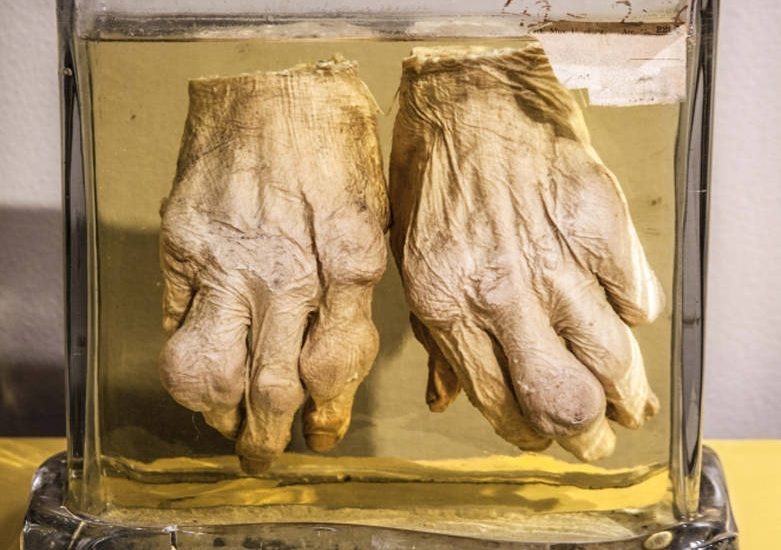 I’m spellbound by the Incarnation: by our fragile, mortal bodies; by the thought of what happens to us after we die. So in Philadelphia recently, the first place I hit was the Mütter Museum.

“In 1856,” reads the brochure, “Thomas Dent Mütter (1811-1859), a professor of surgery retiring from Jefferson Medical College, offered his personal collection of more than 1,300 unique anatomic and pathological materials to The College of Physicians of Philadelphia…The museum opened in 1863…Today the Mütter Museum’s collection includes more than 25,000 fascinating objects.”

I am all for fascinating objects and, within certain parameters, a museum that bills itself as “disturbingly informative.” The curators haven’t been able to resist a nod to the ghoulish. But the nod is tempered by sensitivity—a current exhibit, for example, is called “Broken Bodies and Suffering Spirits: Injury, Death and Healing in Civil War Philadelphia.” And for the most part, the specimens and skeletons and cross-sections and slides are presented for the viewer to make of what she will.

Getting my bearings takes awhile.

“Spinal Marrow”: a 4 to 5 inch piece of what looks like fish cartilage, floating in a glass jar.

“Skull, saved by Judy and George Wohlreich.” Saved from what? Where? Why?

“Inscribed on the side, the skull is identified as that of Andrejew Sokoloff, a member of the Russian fanatic Skopzi sect of the castrated. He died after removing his own testicles.”

“Piece of Epidermis from the Back of President Garfield.”

“Piece of the Thorax of John Wilkes Booth.”

“The Soap Lady,” whose corpse transformed into a waxy substance called adipocere that now looks lightly coated with dirt.

“Cabinet portrait of Admiral Dot, a pituitary dwarf who performed with P.T. Barnum’s circus and caravan. “

The Mütter Giant, from Kentucky, identity unknown.  “The largest femur of any known giant skeleton.”

“By 1958, at the age of 25, he was admitted to an institution for the chronically disabled. Harry was eventually bedridden and spent the rest of his life in considerable pain. he died of pneumonia on November 11, 1973, six days short of his 40th birthday.

Before Harry died he requested that his body be used to help understand more about his disease Harry never met another person with FOP while he was alive, but in death he has helped to unlock many of the mysteries of this disease. “

FOP stands for Fibrodysplasia Ossificans Progressiva, which according to the International FOP Association (IFOPA) fact sheet, is “One of the rarest, most disabling genetic conditions known to medicine. It causes bone to form in muscles, tendons, ligaments and other connective tissues. Bridges of extra bone develop across joints, progressively restricting movement and forming a second skeleton that imprisons the body in bone. There are no other known examples in medicine of one normal organ system turning into another.”

What can go very, very wrong with your teeth if you have syphilis.

I keep wanting to kneel, to cross myself, to apologize. I try to gaze upon the people whose bodies and body parts I am viewing with the same look of sympathy as if they’d still been alive.

Plaster cast made from the bodies of Chang and Eng, the original “Siamese Twins.”

“Teratology: the branch of science concerned with the production, development, anatomy, and classification of malformed fetuses.” Fetuses with heads that are too big, intestines that have burst through the stomach, flippers for limbs.

A foot, affixed firmly to a board.

The mouth of the Soap Lady, open in a silent scream.

“We like to see people suffer,” a priest once observed.

If other people are suffering, maybe we won’t have to.

If other people are suffering, maybe we’re not alone.

“Christ made amends for all of humanity,” a newly sober young woman, groping to make sense of a tortured past and an unknown future, had mused to me that morning. “And when we suffer, we get to somehow…help him. We get to make amends, too.”

“Harry never met another person with FOP while he was alive.”