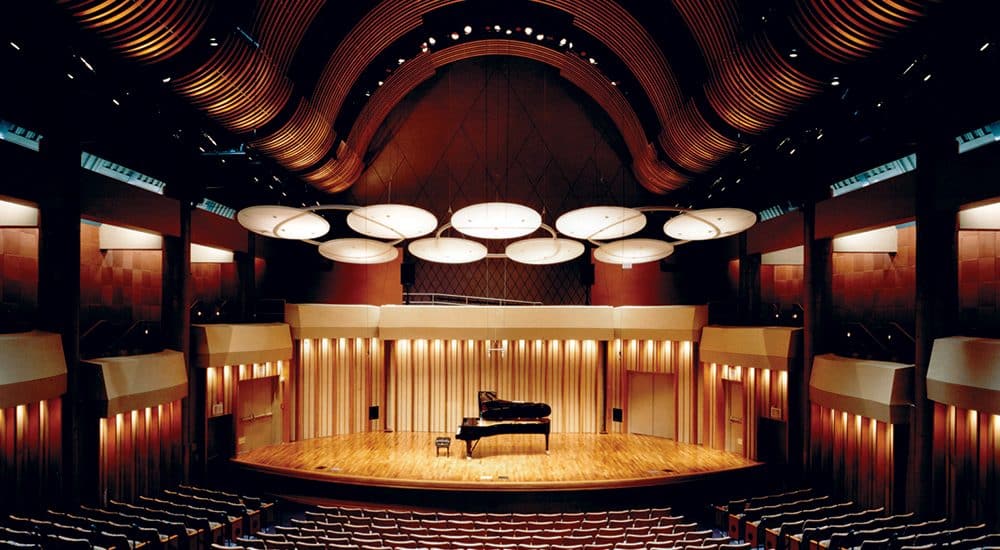 The Colburn School is a world-class performing arts school located downtown on Grand Avenue, kitty-corner from Disney Hall. I can’t say the number of times I have trudged or driven there to drink from the cornucopia of delights, mostly free, that spill from its doors: Faculty recitals, student recitals, Sunday afternoon chamber music in Zipper Hall. Lectures on ballet. An Adult Studies division.

Here’s a program that while not sponsored by the Colburn, takes place there: SongFest, A summer festival and intensive training program for singers and collaborative pianists in art song performance.” For the students who are accepted to the program, SongFest is a stellar opportunity for training and performance with distinguished artists. For the rest of us, it means fourteen events throughout the month of June, with a 2014 mini-festival called “Songs of California.”

Collaborative pianist Victoria Kirsch has devised and coached an event that will take place on Thursday, June 12: I Am in Need of Music/Equations of the Light: California Poetry in Concert. It will consist of settings of poems by Elizabeth Bishop and our own poet extraordinaire Dana Gioia,

Gioia, as you may know, was raised in the South Bay, has served as chairman of the NEA, and now teaches at USC (look for the literary conference he’s spearheading there next February 19-21: The Catholic Literary Imagination).

Elizabeth Bishop had a tortured childhood in western Massachusetts, graduated from Vassar, lived for many years in Brazil, was U.S. poet laureate from 1949-1950, and won the Pulitzer in 1956.

Victoria was kind enough to take time out from learning new repertoire for a chat with Tidings.

What is a collaborative pianist?

In the classical world it’s a pianist who, rather than being a soloist, collaborates either with instrumentalists or singers. I happen to be enamored of classical singing, not just opera, and I love poetry and text and drama and foreign languages and English as well so this seemed like a really good fit for me. It’s a movement all through the world.

It’s always been a place where singers and pianists and composers come to work with student singers and pianists. There’s a young artists’ program, a more advanced, pre-professional program, and there’s also a mentor program. The main focus is on undergraduate through graduate and post-graduate students, so 18 to 35 is the age range. Every year there are also at least four American composers whose repertoire includes art song.

What is art song?

Art song began in Europe and is a salon tradition where people listen to songs and look at paintings and so forth. Schubert wrote almost 800 art songs. Graham Johnson, probably the foremost expert on Schubert songs, is a fabulous pianist who’s been at SongFest for a number of years and will be there this summer. You go to one of his master classes, he’ll quote the poems, he’ll quote letters from the poets, the correspondence between composers and poets. He’s an amazing font of information. He has ways of looking at these musical settings of poetry that just make you think. Fascinating!

Tell us exactly what your event consists of.

I’ll be doing some playing along with a number of students and one faculty member. There’ll also be about fifteen student singers of varying levels.

Dana has agreed to be part of the evening. He’ll be talking a bit about Elizabeth Bishop and his own work. He’ll also recite a number of poems. So the program will be a weaving of spoken word with the songs themselves.

Why Dana Gioia and Elizabeth Bishop?

Bishop was one of Dana’s teachers.  He wrote a remembrance piece for The New Yorker after her death about his time with her at Harvard.

My original assignment was to curate a show involving a California poet. Dana really is a California boy, though he’s lived a lot of places, and he identifies as such. So I chose Dana, and then I chose Elizabeth Bishop partly because of Dana’s association with her, even though she’s not Californian, and also because there are a number of art songs settings on her poetry.

Tell us about the title: I Am in Need of Music/Equations of the Light.

“I Am in Need of Music” is a poem by Elizabeth Bishop, probably one of her best-known. We’re actually doing two settings of that poem. We’re beginning the whole program with a setting by a local composer, Mark Carlson, who teaches at UCLA. Toward the end of the program, we’re doing a duet setting of that same poem, by Lori Laitman. So you’ll have two very different takes on the same poem.

I tried to combine, sort of alternate, the first four songs are Bishop, then three or four by Dana, then a couple more by Bishop and then we end the first half with “Equations of the Light.” Then the second half Bishop and Gioia alternate, poem by poem. The second half of one of Dana’s poems, “The End,” was set by Ned Rorem, one of the deans of the dean of American art song. I think he just turned 90.  So I asked Dana if he’d read the first half of the poem, before we hear the setting of the second half.

I’m not a composer. I’m not a poet. I curate. I’m a re-creative musician is what I call myself.

Beautiful. And this is all free, all open to the public.

All free. You don’t need to make a reservation. Thayer Hall is lovely, 200 seats, perfect for this kind of thing. These songs were meant to be done in someone’s living room, as part of the salon tradition.

For me, there’s nothing like live performance. People communing with each other, watching artists do what they do, participating whether they’re dancing or actively listening—it’s so necessary. Take out the earbuds and enjoy a concert, live—with other people around you.

Or as SongFest faculty pianist Graham Johnson says of his students: “You show us that as long as the human heart understands the conjunction of word and tone as amongst the most beautiful and extraordinary things that can exist in the world, as long as you are alive in this room, teaching, handing on to people younger than you, continuing to be, that this form will never die.”

10 Replies to “SONGFEST AT THE COLBURN SCHOOL”