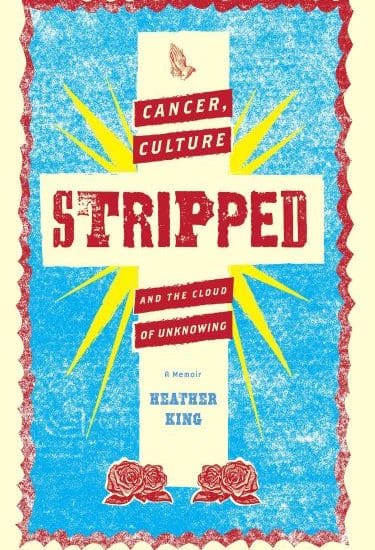 When I was diagnosed with breast cancer in 2000, my first thought was “I’m going to die.”

I didn’t want to fight a battle on behalf of big pharma, my war-obsessed culture, or the fear of being thought a nutbag.

I have my own battles.

I wanted to acknowledge that to be diagnosed with cancer is a traumatic psychic blow. I wanted to educate myself. I wanted to come to grips with my mortality. I wanted, as I have always wanted, to act in freedom (a stretch, as I was panic-stricken) and to make the decisions I thought were right for me.  Not for anyone else. For me.

As it turned out, I was incredibly lucky. My cancer was Grade 1, Stage 1.

I had the tumor removed and then, after reams of research and untold hours of anguished prayer, I went against medical advice and declined all further treatment.

STRIPPED is about the long, slow process of coming to that decision–made on Palm Sunday, fourteen years ago.

It’s about the loss of a certain kind of innocence, the end of a marriage, the deepening of my faith, the vocation of writing.

In fact, it’s not a cancer memoir at all. It’s a memoir about coming to terms with this thought from Kierkegaard: “We come into this world with sealed orders.”

Here’s an excerpt I was living in Koreatown at the time and had just schlepped up, as I often did, to 8 o’clock Mass:

“One Monday morning in the parking lot of St. Basil’s I ran into my friend Frank, a 70-ish Irishman who looked like the angel in It’s a Wonderful Life, had been sober for years, and was squiring a fellow with a rat-like face who was clearly coming off a major bender. Frank was one of these hearty cradle Catholics who are always going off to Europe to visit shrines and talking about some miracle or other. He’d once lent me a very good book called Abandonment to Divine Providence, by a 17th-century priest named Jean Pierre de Caussade. I liked Frank.

Still, when he asked about my cancer and, right there in the parking lot, grabbed my arm and said, ‘Come here, let’s pray,’ I instinctively recoiled. In New England, where I come from, even your own parents don’t hug you, and I had never quite grown used to the touchy-feely ways of Southern Californians. But Frank got a hold of me, and then he made the hungover guy, who reeked of booze, come over, and we all put our arms around each other and Frank placed his free hand on the upper part of my chest and started pouring out a very heartfelt prayer. ‘Jesus, we ask you to help Heather,’ he said, with just a hint of a brogue. ‘You know she loves you SO MUCH, and we ask you to heal her: every tissue, every cell, every limb, every organ’…

Ten years ago—okay, one year ago—I would have died of embarrassment to be standing out in public praying with a geriatric Irish Catholic and some poor mangy drunk, but the great thing about having cancer is that situations that formerly might have seemed traumatic pale in comparison. Also, you very quickly realize you can no longer afford to scoff at anything or anybody that might even remotely have the capacity, and more to the point, willingness, to help.

After a few seconds I realized that to be embraced by these kind, well-meaning folks, who no doubt had many better things to do than take time out of their busy morning to comfort me, actually felt good. So afterward, I said, ‘Wow, Frank, I sure am glad we ran into each other!’ and shook the rat-faced guy’s hand, and we went our separate ways with smiles, waves and, on my part at least, a warm glow of gratitude.

Everything was fine until around two the next morning, when I got up to use the bathroom and thought,
That’s strange, I could swear I’m feeling a little nauseous.”