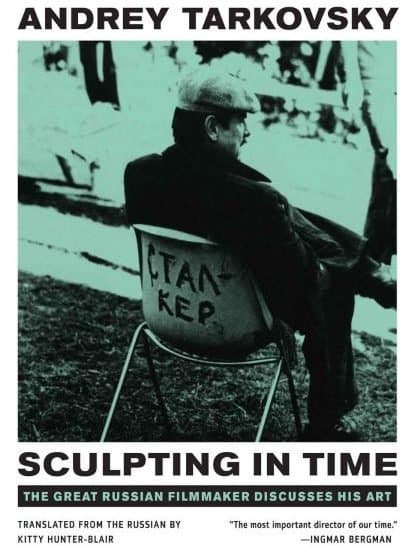 I’ve been reading his Sculpting in Time, which makes me want to go back to his films (Andrei Rublev, Solaris, Stalker) and give them more attention and a deeper viewing.

“Art is born and takes hold wherever there is a timeless and insatiable longing for the spiritual, for the ideal: that longing which draws people to art. Modern art has taken a wrong turn in abandoning the search for the meaning of existence in order to affirm the value of the individual for its own sake. What purports to be art begins to look like an eccentric occupation for suspect characters who maintain that any personalized action is of intrinsic value simply as a display of self-will. But in artistic creation the personality does not assert itself, it serves another, higher and communal idea.”

“The only condition of fighting for the right to create is faith in your own vocation, readiness to serve, and refusal to compromise. Artistic creation demands of the artist that he ‘perish utterly’ in the full, tragic sense of those words. And so, if art carries within it a hieroglyphic of absolute truth, this will always be an image of the world, made manifest in the work once and for all time.”

“I think that one of the saddest aspects of our time is the total destruction of people’s awareness of al that goes with a conscious sense of the beautiful. Modern mass culture, aimed at the ‘consumer,’ the civilisation of prosthetics, is cripping people’s souls, setting up barriers between man and the crucial questions of his exsitence, his consciousness of himself as a spiritual being. But the artist cannot be deaf to the call of truth; it alone defines his creative will, organises it, thus enabling him to pass his faith on to others. An artist who has no faith is like a painter who was born blind.”

“For the genius is revealed not in the absolute perfection of a work but in the absolute fidelity to himself, in commitment to his own passion. The passionate aspiration of the artist to the truth, to knowing the world and himself in the world, endows with special meaning even the somewhat obscure, or as they are called, ‘less successful’ passages in [Tolstoy’s] works.”

“Touched by a masterpiece, a person begins to hear in himself that same call of truth which prompted the artist to his creative act. When a link is established between the work and its beholder, the latter experiences a sublime, purging trauma Within that aura which unites masterpiece and audience, the best sides of our souls are made known, and we long for them to be freed. In those moments we recognise and discover ourselves, the unfathomable depths of our ow potential, and the furthest reaches of our emotions.”

“In a section of Evangelii Gaudium devoted to “The Common Good and Peace in Society”, the first of four principles offered by Pope Francis is that “time is greater than space” (nn. 222-225):

A constant tension exists between fullness and limitation. Fullness evokes the desire for complete possession, while limitation is a wall set before us. Broadly speaking, “time” has to do with fullness as an expression of the horizon which constantly opens before us, while each individual moment has to do with limitation as an expression of enclosure. People live poised between each individual moment and the greater, brighter horizon of the utopian future as the final cause which draws us to itself. Here we see a first principle for progress in building a people: time is greater than space.”