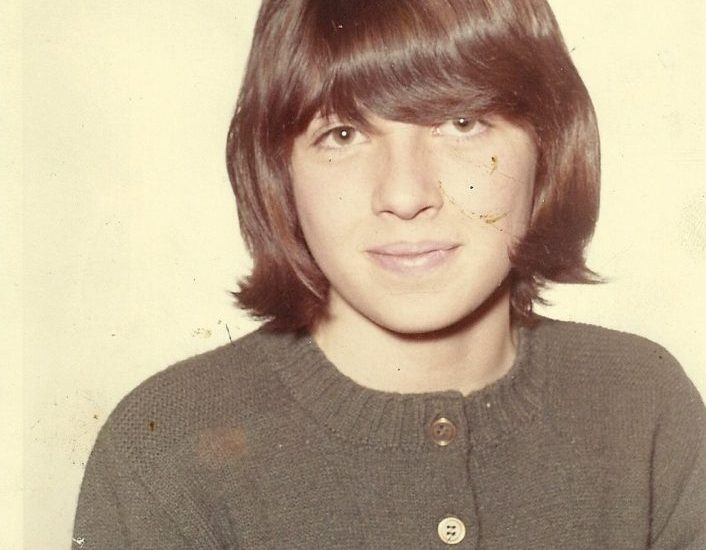 I have always loved a nice warm, snug sweater. I still remember the sweater in the photo above which was a kind of gray-green, to this day one of my favorite colors. Every couple of years I find a sweater I’m really crazy about and then I wear it practically every day, like a nun would wear the same habit or like a person in a mental institution would wear the same pajamas.

A few years ago it was a black hoodie of just the right grade and heft of cotton, then it was this little brown number with three-quarter length sleeves I got a the Goodwill up on Hollywood Blvd.

I have other sweaters but for some reason I get hooked on one, or attached to one, the way a child gets attached to a blanket.

Anyway, lately I started thinking I would like a little light, black ,cardigan sweater. I can’t stand to shop. And though I know it’s “magical thinking” to imagine that you can simply want something and it will appear, the other night that actually happened!

It was last week and around 6 p.m. I was walking east on Sunset Blvd. to the Twin Towers jail to meet some other sober alcoholics and put on a panel for the inmates there. I won’t go into why I was walking except that it had to do with my car still being in the shop even thought the guy had promised it would be ready at 3 and don’t ever go to West Coast Auto.

I could have taken a bus but I like to walk past the sleazy Paradise Motel, and I enjoyed the whole idea of walking to a jail, and really, I just like to walk. So off I set, past the women selling cactus paddles and bags of habanero chilies and bottles of VO5 shampoo out of plastic basins on the sidewalk, the hunched-over old men toting bags from the Dollar Store, the hipster vegan joints and hair “labs” and bookstores.

So I was strolling along, trying to take photos of the full moon and smelling the night smells of wild fennel, car exhaust and wet sage, gabbing with my friend Brian on the phone and all of a sudden, on an extremely unpromising stretch of barred bodegas, botanicas people had set up in what looked like their living rooms, and several places that looked like squats, in the middle of the sidewalk were three racks of totally decent clothes. And the very first item that caught my eye was a black cashmere Banana Republic cardigan that I knew at once was just my size. There was no person around, just these clothes in the middle of the sidewalk so I started peering into the nearby doors and eventually a genial young man appeared (he’d probably been having a nice chat with his fence), I held up the sweater and asked How much, and he said, Two dollars. Two dollars! So I forked it over, yakking to Brian the whole time, and the guys at the jail, as always, gave us way more than we gave them, and Derrick W. (unsung saint) gave me and my new sweater a lift home afterwards and Bob’s your uncle.

I washed my garment as soon as I got home and unfortunately wasn’t thinking that clearly and put it in the dryer so it shrunk a couple of sizes but that won’t bother me at all. Some subconscious confluence of desire, preferences, likes, needs is just craving and therefore responding at the moment to a soft, stretched-out black sweater with sleeves I can push up to my elbows.

As Louise Nevelson said, “I feel that what people call by the word ‘scavenger’ is really a resurrection.”

4 Replies to “THE SWEATER”