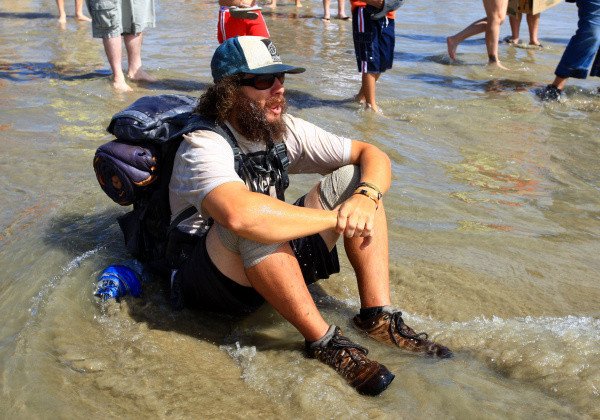 Recently I read this story about 26-year-old Nick Kleckner who, having discovered that material goods didn’t nourish his soul, decided to walk 2600 miles across America, starting in Jacksonville, Florida, with little more than an ipod and a cell phone, fasting until given food to eat, receiving and giving, communing with the homeless. A kind of modern-day Peace Pilgrim, he ended up in Southern California’s Huntington Beach.

From the story, by Laylan Connelly, in The Orange County Register:

He had rules when he set out. He’d only accept help from complete strangers, and he never took help from the thousands of followers who would eventually end up tracking his journey on Twitter. The only solicit he had was a cardboard sign that read “food,” which he would use if he was really hungry. But he never verbally asked anybody for anything.

In Mississippi – the poorest state in America – he was overwhelmed with kindness.

“It just hit me that I needed to give back.”

So he’d give away what he didn’t use or need to other people on the streets. He started handing out granola bars tied with rubber bands to a $5 McDonald’s gift card and a $5 bill.

Soon, he started hearing from people wanting to send him stuff. He’d tell them to give to homeless in their area instead…

If anyone is going to be authentically evangelized, it will be by people like this: a stray voice crying in the wilderness.

35 Replies to “THE NEW EVANGELIZATION”