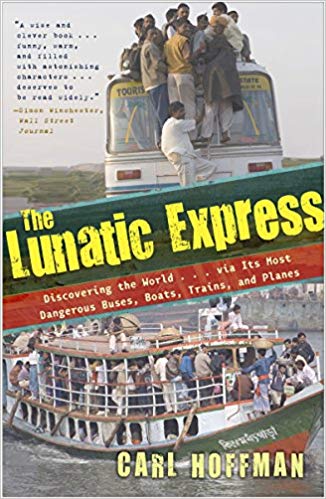 From the book jacket of Carl Hoffman’s The Lunatic Express:

Indonesian ferry sinks. Peruvian bus plunges off cliff. Kenyan train attacked by mobs. Whenever he picked up a newspaper, journalist and award-winning travel writer Carl Hoffman noticed these news bulletins and was struck by how far removed the idea of tourism–travel as the pursuit of pleasure–is from the reality of most people’s experience. Curious and intrepid reporter that he is, off he went, spending five months circumnavigating the globe by its most perilous means of transportation: the statistically most dangerous airlines, the most crowded ferries, the slowest buses, and the deadliest trains. His goal: to understand what travel means to more than 99 percent of the world’s population in the furthest reaches of the planet.

One of the best passages comes near the end. Hoffman’s traveled through South America, Africa, Indonesia, China, Russia, Afghanistan. After months on the road, he’s finally home. He decides to take a Greyhound, which is how the poorest of the poor travel in the U.S., from L.A. to his home in D.C.

We hit Vegas that afternoon, and America seemed like the saddest place I’d seen in months. The worst, most dangerous conveyances in the world always had a mix of people on them, people bursting with life and color and friendliness. In Peru or Mali or Bangladesh everyone was poor. The few rich people flew; everybody else took a ferry or a bus or a train and they prepared for the journey with their carefully wrapped boxes and containers of rice, and the stream of fresh food for pennies was ubiquitous….I thought of Moolchand, poor as dirt, buying me tea; of Fardus, feeding me fresh coconuts from his yard and dreaming of Las Vegas. But this was Vegas. This was America, the dream itself. And it looked like a place cracking, peeling, coming apart at the seams. Who would invite me to their house for lunch? Who even had a  home? When we’d passed temples on the Blueline, Moolchand had prayed; Khalid prayed constantly, for me, for our safety; the men and women to whom he gave money gave us prayers back. Moussa had made tea in the vestibule of the train in Mali, and handed it all around to whoever wanted a cup. Rokibal in Bangladesh had wanted to know everything about me, and Ranjit, the bus driver in the poorest state of India, had given me his red velvet pillow. Wakiba and David had begged me to come home with them after twenty hours of fighting Naoribi traffic, and fed me in a house that had no kitchen and no bathroom. The conditions were deplorable sometimes. Dirty. Hot. Crowded. Groaningly uncomfortable. Dangerous. But all those people had been so filled with generosity and spirit, curiosity about a stranger, and they all in some way had felt connected in a way they didn’t even realize to a larger society, culture, family. But the people around me seemed alone, disconnected; what bound them to each other? To America? What was America? We were a bus of lost souls in a country that itself seemed without a soul.

7 Replies to “THE LUNATIC EXPRESS”