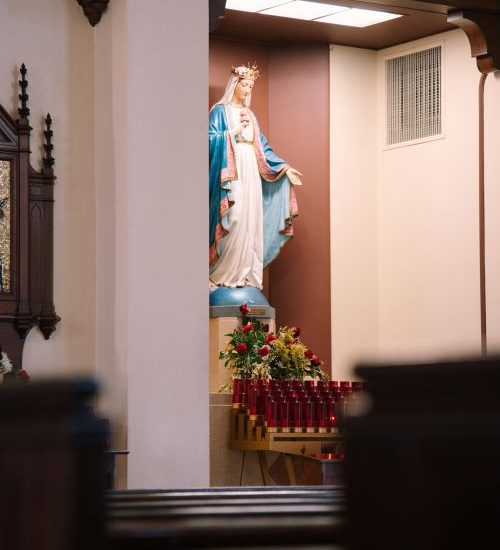 A NICHE AT IMMACULATE HEART OF MARY

I often attend 5:30 pm Mass at Immaculate Heart of Mary on a gritty strip of Santa Monica Boulevard in East Hollywood. IHM is hard by a Rite-Aid, a Staples, a Metro station, a number of Armenian groceries, and LA City College.

Inside the door is a side chapel before which can usually be found a weeping supplicant, on his or her knees, praying. The sanctuary has been undergoing renovations for months–Mass was held for a time last winter in the auditorium of the IHM school next door–and the whole back half, at the moment, is cordoned off with yellow crime tape.

I’m not part of the parish life here but to my delight I have made the acquaintance of regular Mass-goers Larry Bugbee and Eva Link. Larry and Eva run an operation called “THE MINISTRY FOR LOVE, HOLINESS AND EVANGELIZATION” according to their business card.

Larry’s keen on visions, Medjugorje, and Padre Pio. He’s been in a state of high dudgeon for years over the fact that the Church of the Blessed Sacrament up on Sunset, another of his haunts, celebrates but a single Mass on weekdays. And last time I saw him he waylaid me and walked me to my car reporting on Therese Neumann, the Catholic Stigmatist of Bavaria, who experienced visions, suffered torrents of blood pouring from her (sightless) eyes and, from 1922 to her death in 1962, claimed to have subsisted entirely on the Holy Eucharist.

Larry and Eva stand outside IHM after Mass–Eva’s station is out front; Larry mans the side door–hawking holy cards, rosaries, melamine plates imprinted with religious scenes (Our Lady of Guadalupe, The Last Supper), and copies of Magnificat. When I left my July issue on the plane coming back from Boston, I knew just where to go. Sure enough, Eva sold me a copy ($4.95) after Mass last Thursday. She also reported that Larry is entering the seminary in northern California, so that will be a loss, all around, but of course I wish him the very best.

Anyway, so there are Larry and Eva, there are the women who come every day and who often say Evening Prayer from the Office before Mass, there’s the Wednesday novena and the Tuesday Adoration, there are Frs. Rodel and Miloy,  both of whom say a lovely, simple Mass and give a simple, useful homily, often with a bit of sly humor thrown in.

There are the dark scarred pews and the creaky kneelers with their threadbare upholstery and the spirit of love that permeates any place where people have come for decades, after a long, hard day, to bow their heads and give thanks. People who whisper too loudly, forget to turn off their cell phones, get pissed if you inadvertently take “their” seats, and loudly rustle their prayer books, missalettes and paper fans. People who also hunger for ritual, who have the humility to honor the rising of the sun and the setting of the sun, who know to honor the passing, with the Sacrament of Sacraments, of another day.

The world laughs at such people but as a friend who is undergoing a  conversion observed the other day, “Christ’s love is…extravagant, isn’t it?”

That Christ’s love is extravagant means that it is always better to err on the side of hungering too much, rather than too little; better to wear our hearts on our sleeves rather than let them harden from cynicism and despair; better to be willing to let our hunger make us look like fools  than to pretend we have life under control and that our hunger doesn’t matter. To love Christ is to suffer the full unanesthetized pain of not being in control, not being able to “make” things go our way, not being able to make the edges of life match up. To attend Mass is to bow to mystery, not certainty.

We’re tired but we stay anyway: a lullaby, by us and to us. The angel of the Lord declared unto Mary…And she conceived of the Holy Spirit. Here, across town; all over the world in city and country; for centuries past and for centuries ahead, Christ’s ragtag flock lays him to rest for another night.