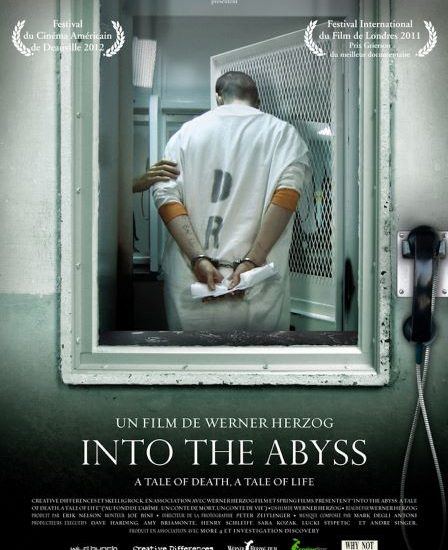 Transcript from the Werner Herzog documentary Into the Abyss:

Allen is describing what would take place on the night of an execution: the dressing in “street clothes,” the eating of the last meal, the accompanying of the inmate, by five men, into the room. And then…

And the other one’d be there in case the inmate…once he lays down if he had a response of trying to get back up, his job was to hold. to hold his shoulders down. You know…you’re not…once you’re up there, you’re up there. You know. Within that time, us four people would have him done…probably within fifteen seconds he’d be strapped down. Completely. Cause we all know where the straps are and what we were supposed to do. The time…to do the process. We trained on it.

It’s the last time you’re gonna see…I’m gonna see him with his eyes open. Cause after the execution’s done and the process went, and they call the doctor to pronounce him dead, and everyboy leaves…my job begins again cause I have to go back in there…that’s also kinda difficult because here you’ve set with this individual for eight to ten hours…all day long…and now the last thing you’re doing is…removing those straps. The straps have to be removed and put ‘em on another gurney for the funeral home….and then…you didn’t think about none a this while you’re doin this…the procedure…none a this…you don’t keep…you don’t put those emotions out there. You…you do the job. You go home.

Q: You did how many executions? Roughly.

A: It was over 125. Somewhere over 120. It was a bunch. It got to the point especially after I got promoted captain in 1990. We were doing two a week. And that was getting tiresome.

Q: And what happened to you there.

A: I…back when they, they brought in Karla Faye…I stayed in back then with her. Now, definitely that was the first…female…that we were fixin to execute. I re-…remember one thing so vividly that…it was an hour before and I was standin there and the chaplain was standin there and she looked at me and she goes, ‘Thank you, Captain Allen, for everything you’ve done.’ [Looks off into far distance]. I said, ‘You’re welcome.’ You know…that’s all I could say. What else am I gonna say, We’re fixin to strap your down in another hour? Unnh…which we went…the procedure and everything went just the way it was supposed to, you know. She was pronounced dead and I went back in there and I took the straps off and put her on the other gurney, we locked everything up and went about our business and everything was fine. I had a little shop in the back and it was 6 o’clock and the news came on over the radio and it started again and for some reason it just out of blue…hearing it…it triggered me seeing her…I started shakin. I thought, What’s wrong with me? And then…

Q: How badly did you shake?

A: It was…it was a shake. Like, I couldn’t…why am I shakin? And then I was just…I was sweating…and tears. All of a sudden I just…this is hurtin. I remembered her, and this was two days afterwards, I remembered her execution…hers was no different than anybody else but it was hers…and I started actually visualizing the other inmates as …you asked me did I look in their eyes…where I could see em. I could actually see em in the holding cell again. You know, one right after the other. And it seemed like there was just…My wife said, ‘What’s wrong with you?’ And I don’t know. I need to talk to somebody. And the first person I could think of to talk was Carroll [?]. Chaplain Picky [?] He came over to the house and we sat in the swing and I started…coming down…and I…he says, ‘What’s wrong with you?’ and I said, ‘I can’t do it no more. I’m done. I can’t….I can’t go back there anymore.’

Q: Could it be that you thought this was not yourself [doing the executions]? That maybe it was your real self at that moment?

A: That was a possibility.

Q: It’s really deep inside of you.

A: Yes, it did. I mean from that point on I’ve had a different outlook in life. If executions was the law, then I was gonna make sure that they were done professionally and with integrity. I was a pro…capital punishment…after Karla Faye, and after all this, to this day, eleven years later…no sir. Nobody has the right to take another life. I don’t care if it’s the law. And it is so easy to change the law…

8 Replies to “INTO THE ABYSS”