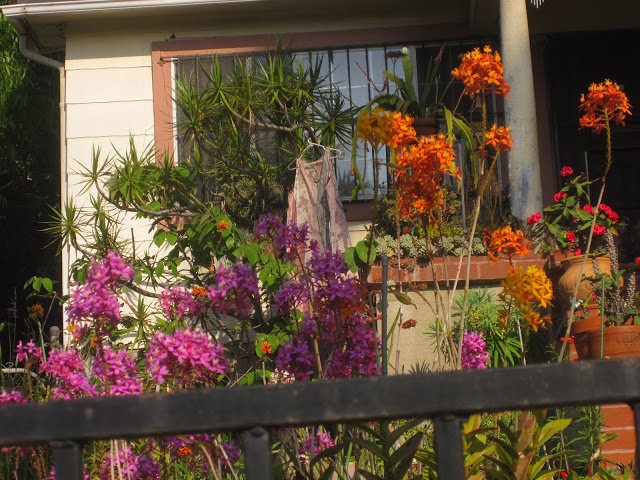 Here’s an archived “All Things Considered” piece that seems apropos for this season of paradox, new birth, and the light shining in darkness…you can listen to it here.

Point of interest: the epidendrum (aka bamboo orchid) is an old-fashioned flower often seen in the yards of old-school bungalows around LA.

I just don’t have the natural touch with plants. I overwater–they turn yellow and rot; I underwater–they shrivel up and die. One day several years ago my husband Tim and I were walking through the neighborhood when we spotted a Japanese woman tending a jungle of plants. They had thick, spear-shaped leaves and blossoms in gorgeous colors of gold, purple, Moroccan red. “What do ya call those?” Tim yelled through the fence and, half-an-hour’s worth of friendly conversation later, we were walking home with a fistful of epidendrum cuttings. I stuck a few in potting soil and, lo and behold, one of them took. Not only took, but eventually grew to a towering, health-radiating six feet.  It was my crowning horticultural triumph, and every time I looked at it, it reminded me of everything that was best about Tim: his sense of fun, his openness, his talent for serendipity.

Two years later, we separated. We’d agreed that parting ways was best but that didn’t make the parting hurt any less. I tended the plants more absentmindedly than ever: watering the browning bromeliads, killing off orchids: did I have a black thumb when it came to relationships, too?   The day Tim moved back East, I cut the epidendrum back so far it almost died: the remaining spindly stalks looked weak and drawn, as if undergoing chemo.

In between, I made treks to the downtown courthouse, sitting for hours in the do-it-yourself divorce clinic, standing in line at the filing window, a 14-year relationship reduced to a few bloodless, boilerplate forms.  “Date of marriage: 5-12-90” would bring me back to the spring day we’d eloped to Nantucket and made our vows before a chain-smoking Justice of the Peace. “Declaration Regarding Minor Children: There are no minor children,” would evoke how we’d almost decided to become parents, but some shared failure of nerve had held us back. “Basis of petitioner’s request: Irreconciliable differences,” made me remember how, even when the air was thick with unspoken anger and confusion, we’d still made it a point to eat dinner together every night.

One afternoon, coming towards Christmas, the final papers arrived: “You are notified that the following judgment was entered on November 25, 2003: dissolution of marriage.” I cried a little, then I called Tim, back in New Hampshire. “Is there an ex-husband in the house?” I said when he answered. “No!” he replied. “It came through?” He told me about his ailing father, I read him the recipe for romesco sauce I’d cut out of the paper and we’d both gone crazy over. “What happened to us, honey?” I asked as we were signing off. “I don’t know,” he said. “Maybe we’ll never know. Still love you, though.” “Love you, too…”

I hung up and looked out the window, thinking, How can you sleep beside someone every night for all those years and then have the relationship end? Maybe “end” wasn’t the right word, I tried to comfort myself. Maybe we were segueing into another kind of relationship, one we were still feeling out. Gazing out over the courtyard, my eyes stopped short at the epidendrum. After months of neglect, the plant was thriving: the leaves lustrous, the grown-in stalks hardy.

And way at the top were two blood-red blooms, nodding their young new heads, their stems intertwined. 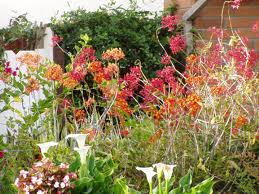 9 Replies to “BAMBOO ORCHID: SCENES FROM AN EX-MARRIAGE”