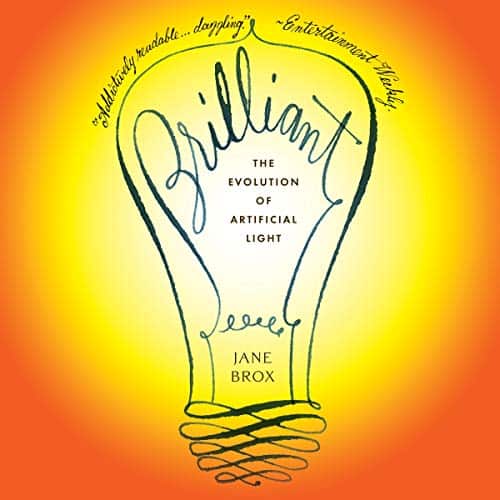 Jane Brox grew up in Massachusetts’ Merrimac Valley, now lives in Maine and has written a number of wonderful books (Here and Nowhere Else; Five Thousand Days Like This One).

Brilliant: The Evolution of Artificial Light, begins like this:

“Although fire has blazed in hearths and flared from pine torches for half a million years, the earliest known stone lamps–fashioned by Ice Age humans during the Pleistocene–are no more than forty thousand years old…Often the lamps were merely unworked flat slabs of limestone, or limestone with natural cavities for the nubs of tallow–animal fat–that had to be replenished every hour…

Eighteen thousand years ago, while above [the cave painters at Lascaux] herds funneled through valleys on their way to the plains near the coast, people ventured far beyond the reach of day–working their way down through stone corridors and twisting through narrows–to draw from memory on the limestone walls and ceilings”…[In 1960, explorers discovered] “a spoon-shaped lamp carved of red sandstone…The lamp possesses a refined beauty: its maker created a perfectly symmetrical bowl, polished the sandstone smooth, and incised the handle with chevrons…Hold it again as it once was held, and the animals will emerge out of the darkness as you pass. Nothing stays still. Shadows nestle in the cavities; a flicker of light across pale protruding rock turns a hoof or raises a head. One shape recedes as another emerges, and everything lingers in the imagination.”

She moves up through wicks (originally made of juniper twigs or moss), candles, lanterns (“Time of Dark Streets”), lighthouses, and gaslight.

Back in the day, streets were perpetually dark, allowing thieves, hustlers, and prostitutes to roam freely, and also affording cover for the private emotions that play over our faces and eyes when we know nobody’s looking. Artificial light changed all that:

“Gaslight also transformed the crowds walking the streets: darting eyes, staring eyes, averted hooded eyes; myriad sounds and colors; confinement and freedom—all became illuminated. What was a walker but “a kaleidoscope equipped with consciousness” [quoting Baudelaire], according the street a soul, according it the power to take one’s own away?”

From anthropologist Walter Hough: “The Eskimo have no phrase expressing a greater degree of misery than ‘a woman without a lamp.’ After the death of a woman her lamp is placed upon her grave.”

“Historian A. Roger Ekirch discovered that medieval villagers slept in a different way than modern people. Each night, they experienced divided sleep. They would go to bed soon after sundown, sleep for four or five hours—this was called ‘first sleep’—and then wake up an hour or two after midnight. Some people inevitably took advantage of the early-morning hours to get out of bed and work: students bent over their books; women did housework they couldn’t get to during the day. Some even visited neighbors or slipped out of the house to steal firewood or rob an orchard. It was a good time for sex. But frequently people would lie quietly in bed, resting or talking, before they fell back into a lighter, dream-filled sleep—called ‘second sleep’—that lasted until sunrise. The quiet, free time in the small hours would have been dearly valued in a society where the days were filled with labor and obligation.

Perhaps nowhere does Brox get more at the “ecstatic truth” of light than in this passage about Van Gogh’s The Café Terrace on the Place du Forum, Arles, at Night:

“The glow of gaslight washes the walls of the café and its canopy roof…[b]ut beyond the terrace, the dark increases quickly, and stars glitter in the gaps between buildings. Present-day astrophysicist Charles Whitney suggests that van Gogh ‘has overpopulated the small patch of sky in view of the interference that might be expected from the café lights.’ And van Gogh himself once insisted, ‘I should be desperate if my figures were correct…I do not want them to be academically correct…My great longing is to learn to make those very incorrectnesses, those deviations, remodelings, changes in reality, so that they may become yes, lies if you like –but truer than literal truth.’ ”

11 Replies to “BRILLIANT: THE EVOLUTION OF ARTIFICIAL LIGHT”