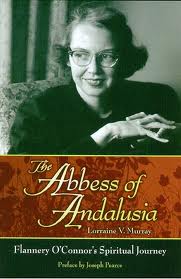 The Abbess of Andalusia, by Lorraine V. Murray, about the letters and life of Flannery O’Connor, moves, mystifies, and inspires.

The intro by Joseph Pearce is first-rate: “It is the suffering of God Himself,” for example, “that makes sense of all suffering, and it is through Christ’s suffering that Christians find meaning and purpose in their own.” The selected quotes from Flannery’s letters, stories, and essays are uniformly gems. And Lorraine gets what many other biographers have not (and if you miss this, you miss everything): Catholicism was the fuse that drove O’Connor’s writing and life.

There are sections on, among other subjects, Flannery’s interior life, her ministry of writing, her conversion of heart, and the action of grace, including “A Reluctant Pilgrim: The Journey to Lourdes,” “Genuine Works of the Lord: Andalusia’s Birds and Beasts,” and “Grace in Suffering: The Cross of Lupus.”

On Flannery’s writing routine:
She opened her day with prayer, spent a few hours pounding out her fiction on a manual typewriter, and spent the afternoons writing letters and reading. Her letters reveal, however, that there was an extraordinary spiritual life beneath the deceptively ordinary surface. It was anchored in prayer and a solid faith in the teachings of the Catholic Church. p. xxix

On making a living with writing:
“There’s no money in it and little consolation except that it looks good when you have to fill out a form…And a year later you will get a few letters from your friends saying they say your book for 33 cents on a remainder table.” She added plaintively: “At least this is what is always happening to me.”

Flannery continued to write her fiction, however, because it was the one thing she felt she could do well, the one talent that she clearly could see coming from God. She also believed that writing fiction was her way to glorify God in return. Following the principles of St. Thomas Aquinas, she held that a good work of fiction doesn’t exist to reform or convert someone, but is rather “a good in and of itself.” A story or novel needn’t have any utilitarian value at all, because “what is good in itself glorifies God because it reflects God.”

Along this line of thinking, it’s clear that other aspects of her writing, whether it was corresponding with friends or writing for Catholic publications, also proceeded from her belief that she was heeding God’s calling, and that this was a good thing to do, in and of itself. Thus, even when she wrote reviews that the editor failed to publish, gave friends tips on stories that never saw the light of day, or wrote for an audience shoe maturity she suspected to match the level of teen-agers, she persevered, because it was all part of her vocation: the reason God made her. p. 115

On Catholic literature:
[Flannery observed:]”The novel is an art form and when you use it for anything other than art, you pervert it”…Perhaps she had in mind certain Catholic reviewers who had harshly criticized her books because they’d wanted her to champion her faith by promoting explicitly Catholic messages and populating her stories with Catholic characters.

As an author who showed the effects of grace in her fiction, Flannery would have been well aware of Thomas Aquinas’s insights on this topic. St. Thomas delineated two kinds of grace: there is the habitual kind, quietly coming from reception of the sacraments and giving us spiritual strength, and another, more dramatic, form that involves God’s intervention in human actions. In her fictional worlds, Flannery often portrays the vivid effects of Aquinas’s second type of grace. Divine intervention occurs in a shocking way to illuminate dramatically how one of her characters either accepts or rejects this divine gift. p. 25

O’Connor has got to be one of the most quotable authors on record, and Lorraine Murray has collated some beauties:

“[A]nything the human being touches, even Christian truth, he deforms slightly to his own image.”

“The Church can’t be put forward by anybody but God and one is apt to do great damage by trying.”

“The creative action of the Christian’s life is to prepare his death in Christ.”

“Life without [the Blessed Virgin Mary] would be equivalent to me to life without sleep, and as she contained Christ for a time, she seems to contain our sleep for a time, so that we are able to wake up in peace.”

Thanks to Lorraine V. Murray.

5 Replies to “THE ABBESS OF ANDALUSIA” 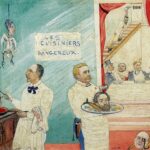