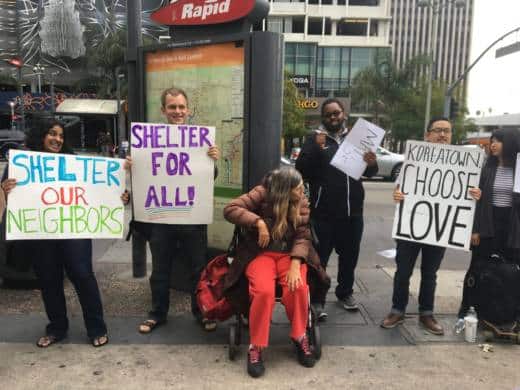 Published in the “Where I Live” column (Home section) of the Los Angeles Times, 8-5-04.
The L.A. Times no longer runs “Where I Live.” And I no longer live in Koreatown.

We all have our own little pieces of personal L.A. history, and one of mine is at the northeast corner of Oxford and Wilshire in Koreatown. 3731 Wilshire is the office building where I worked as a lawyer for the whole of the very strange year of 1992 and, walking around the neighborhood on my lunch hour, found the apartment in which I still live: a one-and-a half-bedroom with high ceilings, French windows and hardwood-floors for $675 a month.

I’ve been walking Koreatown ever since.

“Great problems are in the street,” Nietzsche said, and as a writer, living alone, I not only need to get out and see that other folks are struggling, too: I need to get out, period. Koreatown is nothing if not a melting pot–of cultures, races, demographics–and walking out my door into this heady mixture of the mundane and the exotic is stimulating stuff. Just heading to the mom-and-pop joint where the guy from Seoul changes my watch battery, I pass the Armenian cobbler, the Cuban cigar store (for panatelas to send to my ex-husband), and the Vietnamese salon in a mini-mall just off Arlington where Mai administers soothing pedicures. 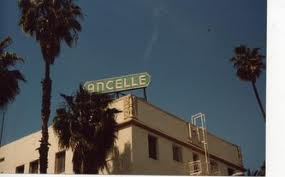 As a Caucasian, I’m a minority in Koreatown, and if that gives me the solitude I need for my work, that also makes the moments of community seem that much more precious. I stop in so often at the Pio-Pico library to pick up reserved books that the African-American security guard once asked if I worked there. Crystal, the junkie who begs change outside the 7-Eleven, inquires whether I’ve had anything published lately. Walking to Windsor Park in the cool of a winter dusk, I sometimes stop in at St. Gregory’s and, along with the four or five elderly parishioners of various nationalities scattered among the pews, kneel for a moment and pray.

So much is at my fingertips! One mango, two eggs, a handful of tomatoes at the corner produce truck. $2.99 bags of frozen pork dumplings at the Assi Supermarket. The strange little bazaar off Western and 9th where, for a week or so in early June, I buy a pound of cherries every day. Food–comfort, color, connection–helps make K’town home. A stone’s throw from the nondescript copy centers and anonymous dentist offices of the Wilshire corridor, there’s Vim’s for chow foon with shrimp and Chinese broccoli, La Plancha for ninety-nine cent pupusas, Kobawoo House for mung bean pancakes and kimchee. At the local 24-Hour Fitness, the air is thick with the smell of garlic.

One thing I’ve noticed from walking is that it’s the poor, the weary, and the mentally precarious who tend to have a kind word or a smile. This is something to be grateful for when, as happens so frequently in the press of urban life, I am feeling particularly poor and weary myself. Waiting for the light to change at the corner of Arlington and 8th  one recent afternoon, I found myself standing next to a guy from the nearby board-and-care: cigarette with an inch of ash dangling off, moth-eaten yarmulke, plastic coke bottle stuffed with water and tea bags. He looked me over–a benevolent sizing up–and took a long drag.

“So what else have you been doing besides building log cabins?” he asked.

“Nothin’ much,” I replied. “Just wandering around looking at the flowers.”

He nodded approvingly–it was as if we’d taken up a conversation we’d begun years ago and would take up again years hence–and we continued in that vein for the rest of the block, parting at the mailbox (into which he deposited a highly-smudged letter) as friends.

Just when I think I know the neighborhood inside out, I discover someplace new: Liborio’s Market, where I nab a can of coconut in heavy syrup for a flan recipe; the thrift store at the Congregational Church on Commonwealth where I happen upon a vintage copy of Betty MacDonald’s Onions in the Stew. There are adventures: the Christmas day the stove busts and I have to farm out a prime rib, roasted potatoes with fennel and garlic, and polenta pine-nut torte to the neighbors’ ovens.

There are surprises: the morning I walk to the corner and find that overnight, the name of the closest cross street has been changed from 9th to James M. Wood. There is serendipity: the antique chair, upholstered in faded pink silk moiré, I find in the alley one lucky evening and single-handedly haul upstairs.

Friday morning I walk to St. Basil’s for eight o’clock Mass: at Communion, I get the Filipino Eucharistic minister who hisses “The Body of Chrissssss” (no “t”) as he puts the wafer in my hand, which drives me nuts but also makes me glad all over again I’m a Catholic as Jesus liked nothing better than hanging out with broken-down prostitutes and homeless people and folks who didn’t have perfect diction.

Sipping a coffee outside the Serrano Starbucks afterwards, I watch the passing parade: thousands of lives intersecting, then going off in their own directions; colliding, picking themselves up and gathering themselves to begin anew; the smallest act–the chance smile, the random act of rudeness–rippling out to our fellows in unseen ways.

I think of the parallel life that haunts us all, the baffling suspicion that things would be better in some other place–“Always you will arrive in this city,” Constantine Cavafy wrote of his native Alexandria, “Do not hope for any other…”.  For a minute I forget I have responsibilities, work, a life. If I sit here all day, I’ll be able to see, half a mile west down Wilshire, the Romanesque tower of the United Methodist Church  silhouetted against the rays of the setting sun.

I can never quite tell whether I’m losing myself or finding myself in Koreatown and I remember the exact day when I realized perhaps it didn’t matter. That would be the afternoon I left my apartment to walk down San Marino and, through the window of a rundown  tract house, heard the halting strains of the same Beethoven sonata I’d just finished playing on my own piano.

8 Replies to “WHERE I USED TO LIVE”