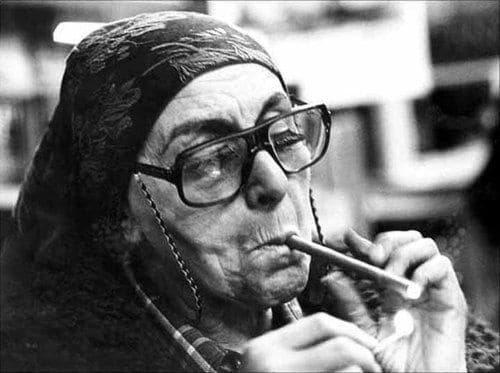 Scavenging isn’t an isolated activity; it’s a way of seeing and experiencing the world that is, or can be, basically ordered toward community. It springs from the idea that the more you’re willing to step outside the lines, the more interesting things often appear. And the lower you’re willing to go toward the bottom, the more layers of existence seem to open.

L.A.is fine, fine pickings, even in the midst of economic collapse. Last night, for example, I set out out for a nice jaunt to Vons for toilet paper when I came upon a big brown grocery bag of clothes on the curb by Parkman and Sunset. I dug right through, emerging with a cashmere Banana Republic hoodie in a fetching shade of orange, two T-shirts, a V-neck brown Gap jersey and two perfectly good pair of heavy socks.

Then I didn’t have anything to carry them in the mile or two to the store so I walked down to the Tropical Café and started rooting around in the outside trash can for a plastic bag. “Just found some free clothes,” I explained to the guy who was standing nearby, sucking on a cigarette. “Ask at the liquor store. He’ll give ya a bag,” he reported, so I went to the corner liquor store where a bunch of fellows who looked like they might have been “between jobs” for about a decade were hanging around watching a soccer game and scraping scratch cards, and sure enough the guy behind the counter gave me a plastic bag and off I happily went, marveling at the kindness of strangers.

On the way to Vons I nabbed a sprig of pink lantana from in front of the Jiffy Lube, and stopped to admire the tulip trees on the overpass above Myra, and then up near where Circuit City used to be fell in with a guy named John who collects plastic bottles and lives in an alley near Fountain and reported that there was a whole community of homeless folk there who play cards till midnight and when they have a particularly good week buy bus tickets and go to Vegas.

Collecting bottles so you can eat is of course a whole other deal than ferreting a Banana Republic hoodie back to your warm, safe room on the hill. But where the two worlds may intersect is in a sense of existential nostalgia and a deep fear of abandonment. For those of us solitary types to whom every moment of connection is extra precious, or who are so in touch with our loneliness that inanimate objects not only keep us company but often seem way safer and more predictable than humans, pieces of wire, pebbles, cardboard, stickers, castoff sweaters and small flowers can take on almost unimaginable significance.

In Raw Creation: Outsider Art and Beyond, John Maizels profiles many such folks and their amazing works of art.

Take John Mikovisch, a retired employee of the Southern Pacific Railroad who built the Beer Can House in Houston.

Later in life [Willem] van Genk drifted away from painting. In the mid-1990s he remained reclusive, finding it difficult to leave his house for fear of hairdressers. Within his home he has constructed an imposing model of a tram station out of paper and cardboard, but it is strictly not for exhibition. He now concentrates on his large collection of plastic raincoats, replacing their buttons with a more imposing kind, and says he likes to feel that when he wears them he is protected by the different personalities he can adopt.”

“At the hospital [Münsingen psychiatric clinic in Bern, Switzerland], [Heinrich Anton] Müller spent much time in a deep hole he had dug in the grounds, possibly in an effort to find solitude or privacy, but he was also active and inventive. He constructed a series of complex machines which were concerned with perpetual motion or simply with reducing gear ratios or creating energy for no apparent purpose.”

“When you put together things that other people have thrown out, you’re really bringing them to life – a spiritual life that surpasses the life for which they were originally created.”