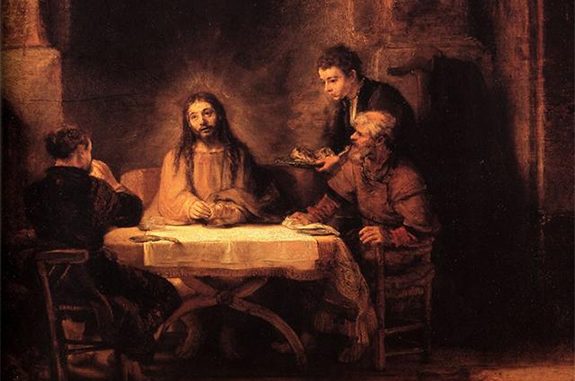 THE ROAD TO EMMAUS, REMBRANDT

Back in 2000, when I was diagnosed with breast cancer, I had one overriding emotion: self-centered, panic-tinged fear. I didn’t know that eight years later I’d be fine, that the scar would be barely visible, that months would go by where the word “cancer” never entered my thoughts. Back then I still thought about it every waking and sleeping moment. So before I even had surgery, I signed up for a second opinion clinic at UCLA.

The day of my appointment, I found a seat and looked around at the ten or so others, perched stiffly on the edges of their chairs. They know what it’s like to lie staring at the ceiling all night, I thought. They could die, too.

“What a bunch of crap,” a voice muttered, and I turned to see a petite blonde gal, about my age, in a Dolce & Gabbana jersey and black leather pants. With one gold-beringed hand she was filling out a clipboard of forms. With the other, she chowed down a Whopper.

“This your first time?” she asked, wiping a smear of mayo from the corner of her mouth.

“First time’s the worst,” she reported, as if I could look forward to several more such visits. “It’s my third.”

“Your…third?” I faltered. That was when I took a good look at her hair–bangs and a shoulder-length flip–and saw it was way too shiny to be real: she was wearing an ash blond wig.

“Oh, chemo’s nothing compared to all I’ve been through,” she informed me. Double mastectomy, reconstructive surgery. Thought I was home-free after the bone marrow transplant”–she paused to scrape the pickles off her hamburger–“but now it’s metastasized to my liver.”

Except for the wig, she looked normal, if a little ethereal: translucent skin, a blue vein tendrilling across her temple.

“I have three teenagers at home in Newport Beach, that’s what keeps me going, that, plus my friends, and shopping. Money means zipola to me, which isn’t exactly great for the old marriage”–she jerked a thumb to her left, where a long-suffering businessman type sat shuffling papers on top of his briefcase–“but at this point I could give a rat’s ass. The only reason I’m here is to see if they have any drugs that might give me an extra month or two.”

I couldn’t get my mind around it: this middle-aged Orange County mall rat, with her manicure and Prada pants, nonchalantly telling me that she was going to die.

“You’ll be fine, though,” she added, giving my knee a friendly slap. “The fear of the unknown is the worst. Actually going through it is no big deal.”

All afternoon I waited in a white room while doctors filed in with their stethoscopes and charts. I prayed my breast wouldn’t have to be mutilated, I prayed they wouldn’t tell me I had some mutant strain that was reproducing at an outlandishishly unheard-of rate, I prayed if I had to die of cancer, it wouldn’t be for a long, long time and they’d give me lots of drugs first. Around 5, the “team”—the social worker, the radiologist—came in to report their findings. The surgical oncologist summed it up. “For patients like you–Stage 1 with a tumor under a centimeter and assuming there’s no lymph node involvement, the risk of recurrence is about nine percent.”

Nine percent ran through my mind like a mantra as I got dressed and gathered up my things. If only it’s not in my lymph nodes, nine percent’s not bad. It could be a lot worse than nine percent. I can live with nine percent. Outside the elevator, I ran into the woman with the ash blond wig.

“Oh hon, that’s great!” she said, leaning over to give me a big hug. “I told you you’d do fine!” She stepped onto the elevator and the doors closed behind her.

How can you describe such goodness, such bravery?—this woman who was dying, who had been through hell, asking “Good news?”—hoping someone else would make it.

I think of her often, this woman from Newport Beach who wore a huge diamond, whose hobby was shopping, who could have treated her husband a little better. And each time I remember how, when Christ walked among his disciples after the Resurrection, nobody had recognized him.

Listen to the story on NPR’s “All Things Considered”.

4 Replies to “RESURRECTION MORNING: THE LADY WITH THE ASH BLOND WIG”