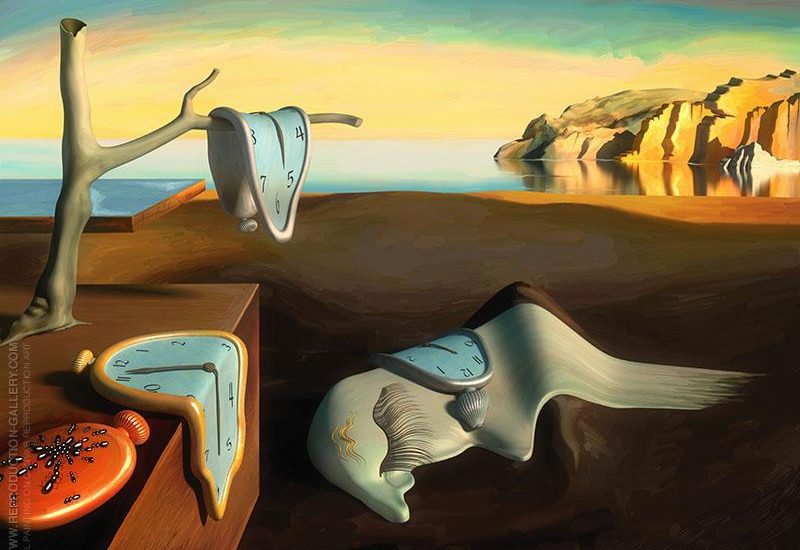 SALVADOR DALI THE PERSISTENCE OF MEMORY, 1931

Einstein said the reason for time was so that everything doesn’t happen at once. That may be true, but I like the poetic approach better.

Gerard Manley Hopkins’ “The Wreck of the Deutschland” is dedicated “To the happy memory of five Franciscan Nuns, exiles by the Falk Laws, drowned between midnight and morning of Dec. 7th, 1875,” one of whom had cried out as the ship went down: “O Christ, Christ, come quickly”…”Let him easter in us, be a dayspring to the dimness of us, be a crimson-cresseted east,” wrote Hopkins, and to know that even one human being, anywhere, once, responded with a line of such beauty, somehow helps us believe Christ did come quickly, Christ must have come quickly…

“We can’t bind ourselves to joy,” observed William Blake, “we have to kiss it as it flies.” We don’t kiss concepts. We kiss people; we kiss what we treasure, and I wonder if Christ did not somehow incarnate time, enflesh time, make time a medium in which love and suffering, if we’re graced to love and to suffer enough, can find their way to one another’s heart.

Anne Harrington, Professor of the History of Science at Harvard, tells of asking “a breast cancer support group, in which the women discussed their feelings, hopes and fears, whether they felt that their support group was helping them live longer.

No, they said, but it didn’t matter, that wasn’t why they’d joined the group.

‘Why then, were they in the group?’ I asked. What did it mean to them. Again, the answer was clear: they stayed in the group because they learned there, from one another, how to live better with cancer and how to die better from cancer, something that they could learn nowhere else in their culture. And more particularly, they had all learned that the process of dying was infinitely eased when one did not die alone; as a group, they had learned that they could give this gift of connection and companionship to one another.

At this point in the conversation, a patient who had been largely quiet so far looked up and perhaps took pity on me. She knew I had come to ask whether they believed that participating in the group was helping them to live longer, and perhaps she thought I was disappointed by their response. So she tried to help by putting the consensus of the group in a different way. ‘If you eliminate the concept of time,” she told me, ‘I guess then that you could say that we live longer.’”

2 Replies to “THE REDEMPTION OF TIME”