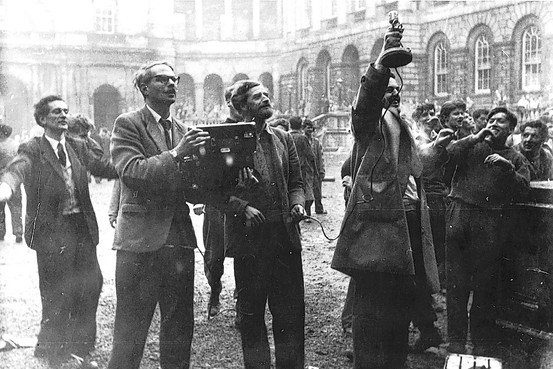 I’m a sucker for those folks who rode the rails, grifted, whored, made guitars out of, say, old cigar boxes and baling ware, picked, plucked and sang in reedy, haunting voices born of bone-hard suffering that seem perfect for Lent.

Here’s a review of Alan Lomax: The Man Who Recorded the World, by John Szwed–that recently ran in The Wall Street Journal:

“As Washington geared up for war in late summer of 1940, Alan Lomax fired off a round of heated memos to his boss in the music division at the Library of Congress. As assistant in charge of the Archive of American Folk Song, the 25-year-old Lomax had ambitious plans for serving the cause, such as publishing songbooks for draftees at military camps and arranging antifascist war ballads for marching bands and pop singers, even recording conscripts with musical talent.

In his barrage of strategies in which folk music could be used to inspire a united fighting force, Lomax paused to take a jealous swipe at a hit record that had won over a nation primed for patriotic fervor: “I need not overstress my opinion that ‘God Bless America’ and Kate Smith are both extremely dull and mediocre,” he wrote. “They have both been elevated to an artificially astronomical position by the power of mass advertising and the star system.

Smith’s operatic bombast had little to do with what Lomax called “real American music.” For him, real American music was performed by rural people such as Texas Gladden, a mother of nine who Lomax recorded a year later in her southwest Virginia home, in a capella, bare-bones renditions of “Gypsy Davey” and traditional songs handed down for generations. “Texas sings her antique ballads in the fashion of ballad singers from time immemorial,” Lomax said. “The emotions are held in reserve: the singer does not color the story with heavy vocal underscoring; she allows the story to tell itself.”

Capturing such performances and the stories they told was a lifelong obsession for Lomax, who wandered America and the globe in search of the sounds of traditional music endangered by the very technology he used to record them for posterity. His travels took him from his native American South to remote outposts of the Caribbean and across the ocean to the British Isles and the fishing villages of Italy and the mountains of Spanish Basque country. His work spanned six decades, from the Depression all the way to the 1990s. (Lomax died in 2002.) He began his career gathering songs with a 300-pound disc-cutter in the back of a Model A and ended it using hand-held video cameras for backwoods documentaries. No matter what the gear, Lomax never wavered from his mission—to find evidence that the world’s poorest places offered some of the richest cultural treasures.”

Read the whole of Eddie Dean’s great review, “The Catcher of Songs.”