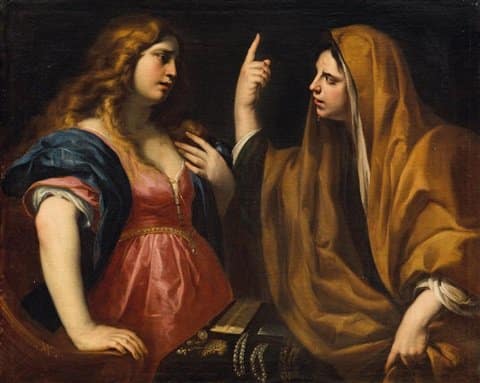 Now as they went on their way, he entered a certain village, where a woman named Martha welcomed him into her home. She had a sister named Mary, who sat at the Lord’s feet and listened to what he was saying. But Martha was distracted by her many tasks; so she came to him and asked, “Lord, do you not care that my sister has left me to do all the work by myself? Tell her then to help me.” But the Lord answered her, “Martha, Martha, you are worried and distracted by many things; there is need of only one thing. Mary has chosen the better part, which will not be taken away from her” (Luke 10:38-42).

“Just as then Martha complained of Mary her sister, so to this day do actives complain of contemplatives. Wherever you find anyone, man or woman, in any body of people, religious or secular (there are no exceptions), who feel moved by God’s grace and guidance to forsake all outward activity and set about living the contemplative life and who, as I say, knows what he is about, his conscience and advisors corroborating, just as soon will you find his brothers, sisters, best friends, and sundry others, who know nothing of his inward urge, or the contemplative life itself, rise up with great complaint, and sharply reprove him, and tell him he is wasting his time. And they will recount all sorts of tales, some false and some true, describing how such men and women who have given themselves up to such a life in the past have fallen. There is never a tale of those who make good.”
—The Cloud of Unknowing, by an anonymous English mystic, circa 1370

8 Replies to “MARY AND MARTHA”