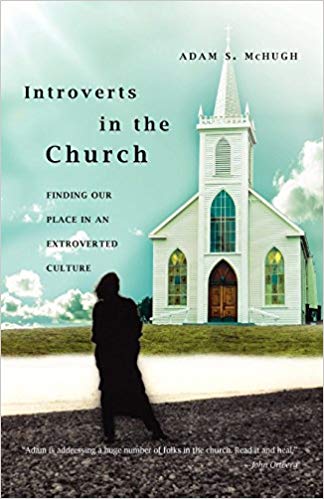 McHugh cites studies showing that introverts are a minority (a quarter to a third of the general population, though recent research shows that the number may be way higher). He points out that we live in a culture that extols extroversion and that introversion may be seen as a sign of weakness, narcissism, selfishness and/or neuroses.

Here’s his summary of common attributes of introverts:

Prefer to relax alone or with a few close friends
Consider only deep relationships as friends
Need rest after outside activities, even ones we enjoy
Often listen but talk a lot about topics of importance to us
Appear calm, self-contained, and like to observe
Tend to think or speak before we act
May prefer a quiet atmosphere
Experience our minds going blank in groups or under pressure
Don’t like feeling rushed
Have great powers of concentration
Dislike small talk
Are territorial—desire private space and time
May treat their homes as their sanctuaries
Prefer to work on own rather than with a group
May prefer written communication
Do not share private thoughts with many people [p. 42]

McHugh comes from the evangelical tradition and writes of his struggles trying to make his way with an introverted personality as a minister in evangelical churches.He refers to introversion as a wound and though I have never felt discriminated against or looked down upon, I have never, ever felt at ease around people.I have made my way. I have faked it. I have taken contrary action. I have forged deep and enduring friendships. But the following passage rang so true that my heart stopped short when I read it:

“Many introverts will relate to a scenario like the following [recounted from an anecdote by spiritual writer Henri Nouwen]. An introverted woman spends hours contemplating a thought or observing a pattern in her life. She turns it over in her mind until it becomes a companion to her and then decides to share it in the context of a small group. When she musters up the courage to voice it, trembling as she puts words to this precious inner stirring, someone in the group cuts her off when she pauses in the middle, her thought still building steam. This person quickly tells her that she shouldn’t feel the way she does or else counters with a story of her own, which only tangentially relates to what the introvert was saying. Nouwen’s words perfectly capture the sense of personal violation and emptiness: ‘Often we come home from a sharing session with a feeling that something precious has been taken away from us or that holy ground has been trodden upon’” [p. 92].

My whole life I’ve thought that if I worked hard enough, I could change.

McHugh cites a 2004 psychological study in which people were polled as to whether they thought Christ was an introvert or an extrovert, and regardless of their own position on the introvert/extrovert scale (because, surprise, we tend to think/hope that people are like us), 97% considered Christ an extrovert!How could the man who went off to “a lonely place” to pray be an extrovert, or a full extrovert? How could the man who spend the first 30 years of his life in obscurity, in “silence,” be an extrovert? The man who stayed 40 days in the desert, in complete solitude, fasting, praying, before starting his public life? The man who spent the night before he died in the Garden at Gethsemane sweating tears of blood, alone with the Father.

No, to me, Christ had major introvert tendencies. Being with us must have made him feel in a way lonelier than ever, just as being with people often makes me feel more lonely. And yet he never blamed, never took it out on us. And he also didn’t let his introvert tendencies keep him from fully participating.

The prime point McHugh makes is that the wound is addressed not by sort of going off by yourself and tending and fostering the wound, but by relationship, and here I think he is exactly right.

20 Replies to “INTROVERTS IN THE CHURCH”