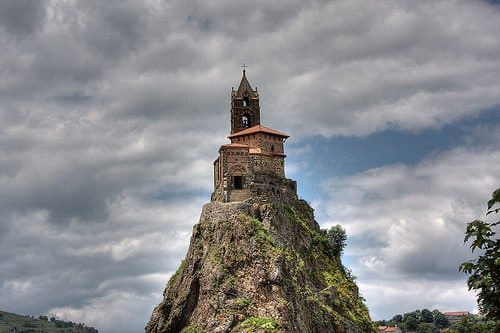 “While we were standing together at the back of the basilica [of St. Michel D’Aiguilhe in Le Puy, France], there was suddenly a tremendous gust of wings. Sparrows and pigeons were continually flying around, but this gust of a bird was mighty and different. We looked up, and there, high above the narthex was the unmistakable, compelling face of a barn owl. Again and again it flew and paused, frantically crashing its white body with terrible hopelessness against the dusty windows. Every so often it would fly the whole length of the church only to soar up again into another barrier of light. I cannot describe how unbearable it was to follow the flight of that bird, knowing that we were quite incapable to give it its freedom. There were holes and spaces, if only it would see them.

Each time it failed, the pause and stillness became longer, and the fearful despair of the bird felt greater.

We left for the library. We couldn’t bear to be there. Later, the whole experience haunted me. The gaze of that particular bird is so involving. I suddenly thought, what if God witnesses in every man a divine spark, which flies within us blindly, like that bird, crashing in terror, punched and pounded from wall to wall, blinded by obstacles and dust, and yet, God knows, that there is a way for natural freedom and ascending flight. What an extraordinary pain that witness would be.”

–Jennifer Lash, from On Pilgrimage

3 Replies to “ON PILGRIMAGE”