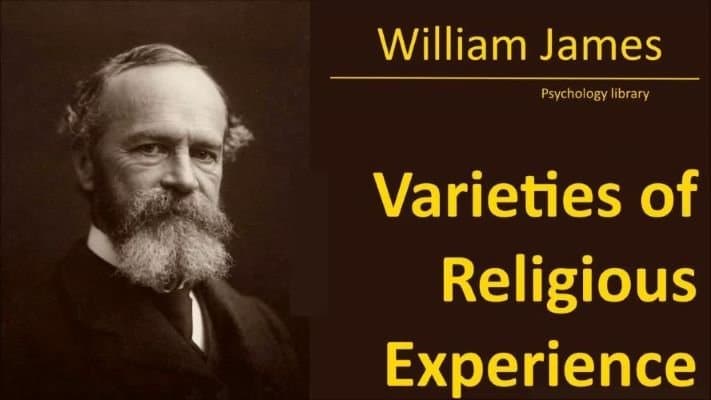 A couple of years ago I finally got around to reading The Varieties of Religious Experience by William James.

I enjoyed it immensely, paying special attention to the chapter on conversion. I heavily underlined  the pages on “The Value of Saintliness.”

But no passage delighted me more than this one, from the chapter entitled “Religion and Neurology”:

“There can be no doubt that as a matter of fact a religious life, exclusively pursued, does tend to make the person exceptional and eccentric. I speak now not of ordinary religious believer, who follows the conventional observances of his country, whether it be Buddhist, Christian, or Mohammedan. His religion has been made for him by others, communicated to him by tradition, determined to fixed forms by imitation, and retained by habit. It would profit us little to study this second-hand religious life. We must make search rather for original experiences which were the pattern-setters to all this mass of suggested feeling and imitated conduct. These experiences we can only find in individuals for whom religion exists not as a dull habit, but as an acute fever rather. But such individuals are geniuses in the religious line; and like many other geniuses who have brought forth fruits effective enough for commemoration in the pages of biography, such religious geniuses have often  shown symptoms of nervous irritability… Invariably they have been creatures of exalted emotional sensibility. Often they have led a discordant inner life, and had melancholy during a part of their career. They have known no measure, been liable to obsessions and fixed ideas…and presented all sorts of peculiarities which are ordinarily classed as pathological.” [italics mine]

I don’t want to blow my own horn, but that is pretty much a pitch-perfect description of yours truly.

And also of many of the people I admire.

St. Thérèse of Lisieux, for example, wasn’t irritable, but she suffered from scruples, nervous excitability, and, when young at least, morbid sensitivity.

Father Damien, the priest who gave his life to the lepers of Molokai, was apparently quite rough  around the edges.

Brother André Bessette, who was recently canonized as a saint, could be crabby, too:  author Henri-Paul Bergeron, CSC notes, “At times he was somewhat irascible, and more than one visitor was disconcerted by his seeming rudeness.” (A woman in a low-cut dress once came to him complaining of chest pains; he replied, “Well, it’s not because your collar is too tight.”)

Hey, tending the door of a church through 40 Canadian winters would make anyone testy; as well, people streamed to him from dawn to dusk wanting solace, help, prayers, healing cures.

Dorothy Day could also be cantankerous.  “She had struggled hard for years,” wrote Robert Coles in Dorothy Day: A Radical Devotion, “to achieve a certain selflessness, until she had come to realize that the very struggle was a contradiction. All she could do, finally, was try to be true to her decent, honorable side, knowing there was another side.”

So give us religious geniuses a break!

10 Replies to “THE RELIGIOUS GENIUS AT MY TABLE”