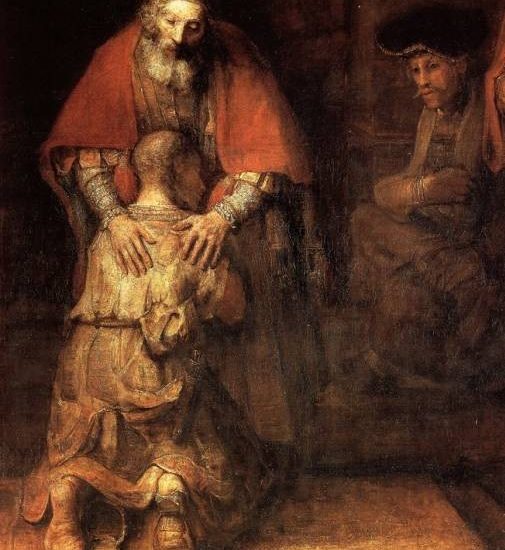 REMBRANDT, THE RETURN OF THE PRODIGAL SON, c. 1662
Collection: The Hermitage, St. Petersburg

The spiritual writer Henri Nouwen (1932-1996) once saw a reproduction of the Rembrandt painting of the parable of the Prodigal Son [Luke 15: 11-32] and became so entranced that he traveled to St. Petersburg, wheedled the administration and guards, and sat before this great work of art for five days, gazing, reflecting, pondering.

Nouwen reflects deeply on the younger son, the elder son, and the father (at different times, we are all of these characters), realizing in the end that he himself was called to be a “father”–as a priest, as a person. And he makes a very interesting point, especially for those of us who are getting on in years, about how people don’t want to consult with the father about the little comings and goings of their daily lives. They want to be out and about having fun, they don’t want to consult with or invite or let the father in on everything, they just want him to be there when they need him, when they need guidance or direction or mercy or the deep God-like welcome that asks no questions, that doesn’t condemn or judge but simply welcomes, embraces, and blesses.

“Before now I was never able to see how the love of the father embraced not just the return of his younger child but also his running away from home…Perhaps the whole movement of leaving and returning is only one movement rather than two, especially as it is experienced in the loving heart of the father. This is not a parent who says, “Don’t go.” That kind of statement is not in keeping with the spirit of this story. The spirit of the story is different. It reads, “Yes, son. Go. And you will be hurt and it will be hard, and it will be painful. And you might even lose your life, but I will not hold you back from taking that risk. When and if you come back, I am always here for you. But I’m also here for you now in your leaving. Yes, we belong together and I am never separated from you.” This aspect of divine Love is, for me, a critical life-connection.”

“And in the passage of return there is a further step to be taken. The return is not just about you and me, but it has to do with our response to another person’s resentment. Seeing what we do, and working to change, there is an urge to critically judge resentment seen in others. This is important because we each must choose our reactions to the anger and pain of others. It is when we are primarily giving thanks for our lives that we have the potential to receive another’s anger and judgment while remaining upright and letting it move through us. When we are looking for occasions to be grateful we hear anger and pain in a new way and can more readily accept it as being theirs and not ours. It is in that spirit that we try simply to receive it without judgment. This is only possible as we adopt thanksgiving as our way of living. Otherwise their resentment connects with ours and that only makes things worse. In the grateful life we no longer listen to another’s resentment as an affirmation of our own. Nor do we judge. We simply receive it in love.”

“Each one of us, as well as all who went before us, share the human condition and suffer from being loved imperfectly. [to wit, by our parents] We are not meant to stop at simply feeling the pain of these wounds, nor are we to become stuck in guilt or accusations. Rather this whole experience is to move us toward accepting a relationship with God’s living Spirit of Unconditional Love. Our spiritual journey is nothing more than a return to the intimacy, the safety, and the acceptance of that very first relationship with Love, that is uniquely present and at home within each one of us.”

“We all know the lonely person in others or ourselves who, through so many disturbing behaviors, is asking, ‘Please recognize me, please love me.’ Human suffering is so often an expression of our extreme need to feel genuinely loved, and when we know nothing about the first love, we turn to others who cannot offer us the love we need…

Look at the hands of the father in the painting. Very few people notice at first glance that there are two different hands, one of a man and the other of a woman. Rembrandt knew that the Divine was not merely a man looking upon creation from the sky, and he understood something about the Creator that Jesus wanted us to know…Rembrandt painted the hand of the woman for an earlier painting of the Jewish bride. She has very delicate, gentle, and tender hands that speak about who she is as women—protecting, caring, and inordinately in love. The hand of the man is Rembrandt’s own hand. It speaks of who he is as father, supporter, defender, and giver of freedom. After a long life and having lived the death of both of his wives and all of his children, Rembrandt understood the depths of holding and letting go, of offering protection and freedom, of maternity and paternity. That’s how he was able to paint this image of God toward the end of his life.”

–Henri Nouwen, all from Home Tonight: Further Reflections on the Parable of the Prodigal Son

13 Replies to “THE RETURN OF THE PRODIGAL SON”