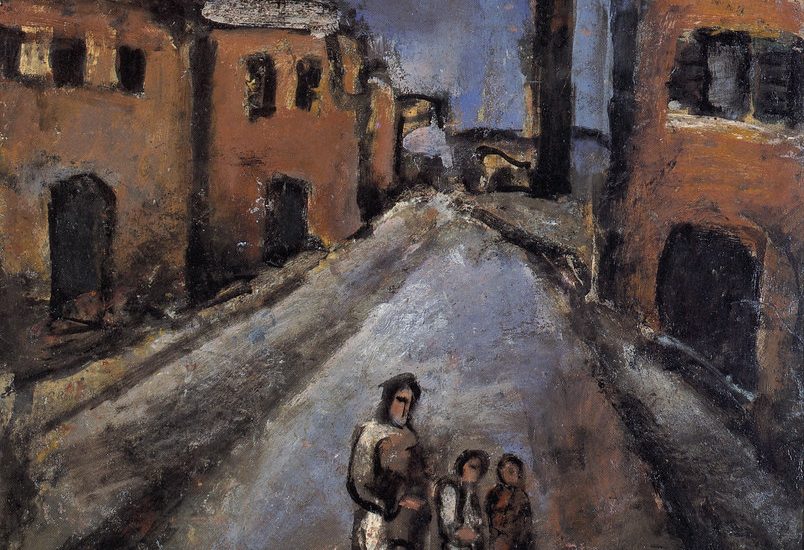 Georges Rouault - Christ in the Outskirts, 1920 at Bridgestone Museum of Art Tokyo Japan

The other day I was part of a discussion where the subject turned toward death, and how people’s parents had handled the subject when they were kids. “It’s just like going to sleep,” several mothers had explained, which of course had plunged the poor little 5- and 6-year old tykes into months of bedtime existential terror. One finally came back and said, “Mom, I don’t like that it’s like falling asleep. I’m afraid I won’t wake up.” So the mother thought for a minute, then said “Okay, dying is what it was like before you were born.” Which was somehow even worse…

I don’t know if it’s a matter of aging, or just temperament, but I personally think about death a lot. Wouldn’t the joke be on us if God really IS an old man with long white hair, for instance? Christ himself called Him the Father, which connotes some kind of personhood and I can’t imagine, if God is love, that He is not also somehow enfleshed, in some recognizable form like us. We don’t love disembodied ideas or abstractions or feelings. We don’t “love” peace. We don’t love love. We love people. Thus,in fact, Christ.

Earlier this year, I did a 40-day more or less silent retreat at a place on the Gulf Coast. I was far from home, and had given up my apartment in L.A. and had set off with some undefined but extremely pressing urge to get closer to Christ. All my life I have had this burning hunger, this drive for meaning, and it had only grown.

That I had found my way to my three “homes”—sobriety, writing, the Church—was cause for abject rejoicing, but what gnawed at me was whether there was perhaps more: something else I’d been put on earth for. I did not understand the very deep pull to solitude. Sometimes I wondered if I was too much alone, and sometimes I wondered whether I should be alone more, whether I actually had a calling to be a contemplative hermit, which is kind of funny but not really.

I just so wanted to give all of myself and I could not seem to find the place or person or whatever to focus it all on! I literally was willing to consider joining a religious community or some kind of community, though the problem there would be that after about three hours with people I get extremely antsy and edgy, even if they’re not talking. Not because I’m especially mean or impatient, though I can be both, but because my whole way of existence…I live life at this sort of inner fever pitch which requires a ton of solitude and silence.

I love to talk and gab and chat, too, but within pretty well-defined limits. Like sometimes friends will say, “I watched a couple of movies today and had lunch with so-and-so and went shopping then went to a party,” and I’ll just think, If I had to do that for even a single day I would die. I would jump out of my skin at not getting to just wander about and think, write, ponder, take a solitary walk, look at the trees.

Speaking of which, Darwin would have had a field day at this place: the sky, the ground, and everything in between teemed with life. Armadillos huffed around the foundations of my cabin. Two pygmy owls and their three babies nested in the branches of a  live oak. Javelinas ambled out from the palmetto scrub. Broods of wild turkeys, a mother and eight or ten babies, bobbed across the drives. Altamira orioles, heart-stopping, brilliant orange-gold with jet black markings—if you’d seen one such bird in your life, you would have counted it a triumph—abounded.

The first thing I noticed was that my life here was not that different from the life I lived in L.A.: I already lived the life of a contemplative in the middle of the city. The second thing was that the main reason I’d come was to get some kind of spiritual direction, some encouragement, some validation, some guidance. And for whatever reason—and the reason could have had to do with the way I presented myself, or any number of other factors that did not reflect badly on me or the other person—there was nothing. I don’t mean just a little, or not what I wanted to hear or expected to hear, I mean nothing. I was not foundering. I had not lost my moorings. I was not (for once) exaggerating the situation or feeling sorry for myself. But I would have had to be sort of willfully ignorant not to notice that over the previous several years I had had a lot of failure, a lot of no answers, a lot of no matter which way I turned, a blank wall.

I also would have had to be willfully ignorant, however, not to see that I had been formed, that a new person was being formed, by this very deep solitude. I had found my three homes, for example, and I had also found (as is inevitable) how much the three homes could be exactly like the world. As always, there were a few rare, shining, Christ-like examples. And as always, everybody else, including me, wanted to make a buck or be at the top of the heap, everyone wanted to have a platform, everyone wanted to say their way worked, everyone had their idols and as soon as you got into a community or a movement, the movement tended to became your idol.

The people who preached poverty so often hated the Church! How can you go to church? they’d ask. How can you stand the homilies, the music, the bad architecture, the hypocrites?  And I would think: You don’t know what poverty is. You have never known the poverty of being so poor in human companionship, so starved for touch, so hungry for the truth that you have stumbled into church like a drowning man seizes a raft. You have never been poor enough that you have been so grateful for whoever  turned up in the pew beside you, for a smile, for a priest who said Mass, that you have fallen to your knees and sobbed. You don’t know what it is to be poor until you have no family, no man, no friend who understands your heart, no-one to support your work to which, day after day, year after year, in silence, in solitude, you give your life.

Still, as I said, I’d begun to see that this strange little existence of mine had some kind of weird value. I was in the world but not of it; I never had been. I’d been a blackout drunk for 20 years, and then I’d gotten sober, and married, and divorced, and written, but even when I’d been doing “normal” things I’d known that real life lay “beyond.” It’s not that I hadn’t participated, especially as of late, it’s that I had always seen the things on earth as pointing to the things beyond. And even though I’d been educated as a lawyer, and lived in L.A., and had friends who were in the world, I was still not exactly of the world. I did not watch TV, for instance. I had never so much as heard Obama speak. I just did not read about or listen to or pay any attention to politics.  I didn’t need to pay attention to politics to know that we were doing terrible terrible violence to ourselves and each other, the world over: emotionally, physically, spiritually, financially, sexually.

I was immersed quite enough in culture. I saw the billboards. I read the New York Times Book Review. You don’t need to immerse yourself in culture, you need to walk down the street and look at people’s faces, to love them, to see their hunger. You need to feel the suffering of the world and to see with horror how you contribute to it. You have to undergo not so much penance as a kind of purification. People will always hear the truth; it’s just that nobody dares to speak it. And the person who does dare to speak it is going to stand outside culture somehow.  And suffer.

Anyway, every night after supper I’d take a long walk. No-one would be around. Every once in awhile a pickup from the local game preserve would drive by: I’d wave, they wouldn’t. I’d study the sky, marvel at the wildflowers. Think about what I was working on, wonder what was going to become of me. Worry about my mother and some difficult stuff that was going on in my family. And one night, I was almost back, with the drive like an allée, lined with tall trees, stretching straight before me.

It was not the cool of the night—the nights, like the days in this part of the world, were sweltering—but it was towards night. Afterwards I realized, too, that I’d been in a kind of “garden,” which is where lovers meet.

And suddenly I thought: Someday I’m going to walking down a road like this and Christ is going to be walking toward me. What if he materialized right now and started walking toward me—would I recognize him? I thought of how, when you get off a plane and you know someone is waiting for you, it still takes you a second to recognize the person among all those strangers. I thought maybe we would look at each other for a minute—you know, with a little expectant smile—“Is it you?”  And then I’d know. I’d just know. This face I’d been looking for, searching for, waiting to see, my whole life.

20 Replies to “O DEATH: CHRIST IN THE OUTSKIRTS”