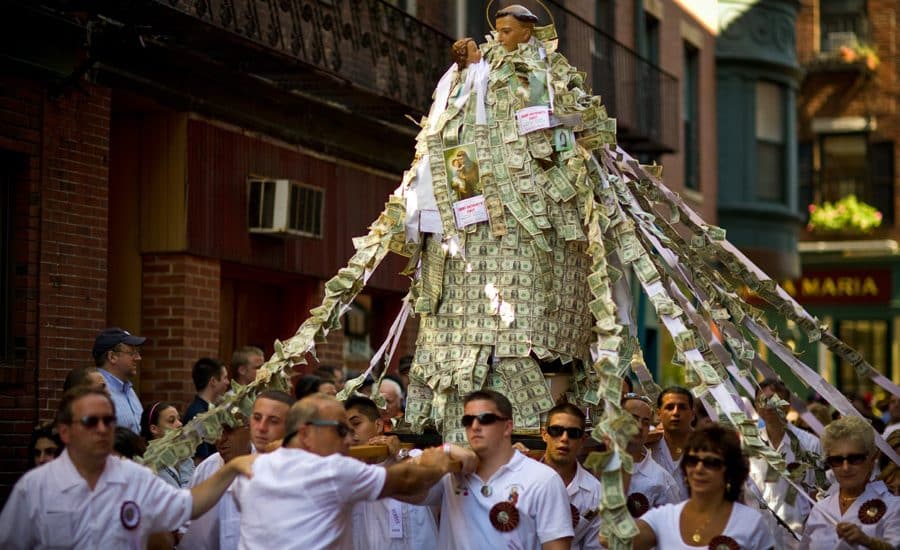 The good Brother André puts me in mind of another unsung saint: Mary Renaccio. Mar still attends daily Mass at St. Anthony’s on “Ahch” (Arch) Street in Boston, conducts a one-woman feeding/clothing/comforting the poor operation on the streets of the West End, and dispenses utterly sane, theologically sound, wisdom. “It haaaaaapened, Heathah,” she observed in a recent phone conversation, re “the dark years,” as I call them. The years I spent drinking myself into a stupor at “Misty’s” (MISTY’S IS A PSEUDONYM) and during which Mary–cradle Catholic, fellow regular, and non-drunk–treated me as the least of these I certainly was, and ever am.

So here’s a little Advent offering from my memoir Parched. And thanks be to God for Mary.

“Mary, an Italian beautician in her early 50’s, was one of the more raucous of the Misty’s regulars–her Saturday night entrance consisted of strolling in with her collie Princess, standing stock still and yelling down the length of the bar, “Anyone get LAID this week?”–but she was also responsible and mature in a way that put the rest of us to shame. For Superbowl Sunday, she spent days cooking giant pans of lasagna and ziti with meatballs, then hauled them down to the bar from her apartment. She’d taken in her nephew Richie–who’d done one too many hits of acid in high school and hadn’t been right since–when her sister found him too much to handle, brought her wheelchair-bound father to Mass every Sunday, and many nights dragged me back to her apartment after the bar closed, warmed up a bowl of pasta fagioli, and put me to bed on her couch.

In between, she worked six days a week at Fashion Beauty, her downtown hair salon, which was located on the second floor of a Tremont Street merchant’s building. One Saturday afternoon, on my way home from a little shopping trip to Filene’s, I walked up a creaking set of wooden stairs, down a hallway filled with driving schools and cut-rate travel agents and stopped in for a visit. Richie lounged slack-jawed in a chair of turquoise vinyl, Princess dozed by the utility tray, and smoke from Mary’s Virginia Slim, perched in its glass ashtray, wafted over a sink full of pink foam curlers.

“Heathah! Come in, come in, whadja buy, ya hungry?” Mary yelled, waving a hand whose fingers gripped little rectangles of white tissue paper. “She’s hungry, Rich, run down to Bailey’s and get her a turkey sandwich, she likes lettuce, take it out of my wallet.”

“Fuhgedabout it. Buy me a drink next time if you want.”

I made myself at home, spreading out on an orange recliner, lighting my own cigarette and surveying the scene. One woman was reading Ladies’ Home Journal under the clear plastic bonnet of a hair dryer; another, a hefty gal in knee-length Supp-hose, stared stolidly ahead as gray goo dripped down her thinning scalp. Mary was short and curvy, with oversized glasses that made her look slightly bug-eyed, and she had the easy economy of movement that comes from years of practicing the same trade in the same small space. Moving between the sink, the supply closet, the three Naugahyde chairs, she kept up a running patter. “Too hot, Gert, turn it down, no, no, hon, on the right, like that.” “Lo, fifteen minutes, you want another magazine?” “Is that Patrick cute down the bah, Heathah? Twenty yeahs youngah and I’d jump his bones…”

I’d only planned on staying a couple of minutes, but the conversation–the latest Kennedy scandal, the bum of a mayor, the son who was going to be a cop–was as soothing as the sound of a Red Sox game coming over the radio on a summer’s day. “Can you believe the price of bedspreads, Mary? Fohty dollahs for a twin,” Lo shook her head, and Gert weighed in with, “Three-fifty now they want in the bakery for a dozen macaroons!” More clients drifted in, women who had been coming to Mary for twenty or thirty years, who worked as housekeepers or nannies, and shopped the sales at Jordan Marsh, and had grown children who didn’t pay enough attention to them. Mary called them “Deah” and treated them like angels, as if they had glorious manes of golden tresses and had floated up the stairs on wings instead of hauling their swollen carcasses one step at a time, stopping to shift their bags and catch their breath.

I ate my sandwich and shot the breeze with Richie–“Rich, dja get bombed last night?”: “Unh, yuh”; “Rich, how much ya smokin these days?”: “Two packs, Mar’s gonna kill me”–and finally I had to get ready for work and it was time to leave. “Thanks, Mar, so long, Rich” I said, gathering up my things.

“Take this shampoo, Heathah, it’s a sample,” Mary said, handing me a full-sized bottle of Pantene. “Richie, wrap up those chocolates for her, we’ll never eat them all.” She was combing out and spraying one of her clients, an exhausted-looking soul with an Ace bandage wrapped around her elbow who left just before me. I trailed the woman downstairs. Just before hitting the street she paused to girlishly admire, in the reflection of the plate glass door, her shapeless coat and work-worn face topped by a spun-glass halo of bright, pretty hair.

There was something different about Mary, something I couldn’t quite put my finger on at the time. Unlike me, she didn’t live entirely for herself.”