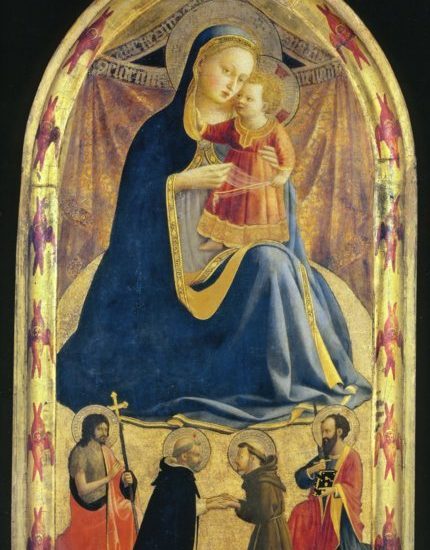 It’s December and true to “holiday” form, an almost sickening pall of gloom has descended. I’m sharing a house with someone who celebrates Christmas as a secular holiday. It’s cold. I finally got notes on my St. Therese of Lisieux book and the upshot is I’m looking at a 50% rewrite. I haven’t set aside the MANY hours I’m sure it will take to tally up the grand total, but as near as I can figure I made approximately 8000 dollars this year.

But the real deal is that there’s something about Christmas that, especially for those of us with a melancholic bent, points up the essential friendlessness of the human condition. Like most of us probably, I have many friends–good friends, kind friends, generous, loyal friends–and then in a way I have no friend. Like most of us, I try to practice “To have a friend, be a friend”–with mixed results. This isn’t a matter of self-pity; it’s more a reflection on the impossibility of the kind of Friendship we long for; of the fact that we all in the end, live alone, sleep alone, die alone, even if we’re with someone who’s pledged to share his or her life with us. It’s a reflection not on how nobody loves me but on how fundamentally difficult it is for any of us to love anybody.

It’s at Christmas I’m at one with the Zulu:

“In the beginning is the relation.

Consider the language of “primitive” peoples, meaning those who have remained poor in objects and whose life develops in a small sphere of acts that have a strong presence. The nuclei of this language, their sentence-words—primal pre-grammatical forms that eventually split into the multiplicity of different kinds of words—generally designate the wholeness of a relation. We say, “far away”; the Zulu has a sentence-word instead that means: “where one cries, ‘Mother, I am lost.’” And the Fuegian [indigenous inhabitant of Tierra del Fuego] surpasses our analytical wisdom with a sentence-word of seven syllables that literally means: “they look at each other, each waiting for the other to offer to do that which both desire but neither wishes to do.”

–Martin Buber, I and Thou