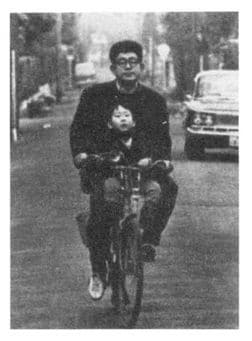 The liturgical season known as Advent–the four weeks leading up to Christmas–has begun. In a season where we celebrate a God who assumed human flesh and came into the world as a baby–poor, in exile, surrounded by scandal–I’m thinking of the work of the Japanese writer Kenzaburō Ōe. In 1994,Ōe was awarded the Nobel Laureate in 1994 for creating an “an imagined world, where life and myth condense to form a disconcerting picture of the human predicament today.”

Back in 1963, Ōe’s wife, Yukari, was pregnant. Doctors advised the couple that the baby would be severely developmentally and physically disabled, and urged them to abort. They chose otherwise, and their son Hikari was born. He was visually impaired, epileptic, and possibly autistic. He did not speak.

For a writer, a more unpromising son that Hikari could scarcely have been imagined. This is no sentimental, faux-tender call to pretend we adore the handicapped. We would not adore them nearly so much if we had to live with and take care of them. Ōe has written of Hikari’s abysmal oral hygeine, his bad breath, his immovable bulk, the years of laboriously accompanying him to the special school via bus and train–hours that could have been spent writing, producing–and then the same trip again in the afternoon to fetch him back.

And yet the most helpless, the least efficient, the most unlikely to carry on the family name–the Ōes went on to have two more children—became in some sense the unlikely “star” around whom the family constellated. In spite of terrible suffering and struggle, this developmentally disabled child, curiously, in unexpected ways, by virtue of a process that nobody could have imagined or willingly undergone even if they could have imagined it, became a perverse source of strength.

Kenzaburō Ōe went on to write novels, essays, and memoirs around the central theme of his disabled son–this Great Fact, this “personal matter”–that has shaped his work, thought, and life. And though the story would have been just as “miraculous” otherwise, Hikari Ōe turned out to have an uncanny facility for music, and is now a successful classical composer.

Ecce homo–behold the man–said Pilate when Christ stood before him in solidarity with all the lonely, all the poor, all the unlucky, all the aged, the unborn, the deformed, the weak, the unwanted;  bloody, scourged, bound, wearing a crown of thorns, and above all, silent. It is Christianity’s most central tenet: that the individual is to be treasured. That a single act of love can and does save the world. That the fate of all mankind can hinge upon the awakened consciousness of a single soul—and that every soul therefore matters.

Hikari’s awakening began when he heard a bird in the woods. There’s a silence around that moment, too:  the silence of indrawn breath, the silence beyond time and space in which we wait–for the next four weeks especially–without words:

Q: Your son became a composer. Your family—your wife, your children and yourself—in caring for him over time identified his ability to communicate. Tell us how that came out.

A: Until my son was four or five years old, he didn’t do anything to communicate with us. We thought that he cannot have any sense of the family. So he looked very, very isolated—a pebble in the grass. But one day, he was interested in the voice of a bird from the radio. So I bought disks of the wild birds of Japan. I made a tape of fifty specimens of birds—bird calls. There are the bird calls and a very flat voice, a woman announcer, says the names of the birds. “Tada-dada,” then: “Nightengale.” “Tada-da.” “Sparrow.” “This is nightengale; this is sparrow.” We continued to listen to that tape for three years. During those three years, when we played the birds’ songs, my son became very quiet. So it was needed to make him quiet. My wife must do her work, and I must do my work. So with the bird voices we three lived on.

In the summer when he was six years old, I went to our mountain house, and while my wife was cleaning our small house, I was in the small forest with my son on my shoulders. Nearby there is a small lake. A bird sang, [one of a pair]. Suddenly a clear, flat voice said, “It is a water rail.” Then I shook. Utter silence in the forest. We were silent for five minutes and I prayed for something, there on my head. I prayed, “Please, the next voice of that bird and please next the remarks of my son, if that was not my phantom or dream.” Then after five minutes, the wife of that bird sang. Then my son said “It’s a water rail.” Then I returned to my house with my son and talked to my wife.

5 Replies to “ADVENT: THE WORK AND LIFE OF KENZABURŌ ŌE”