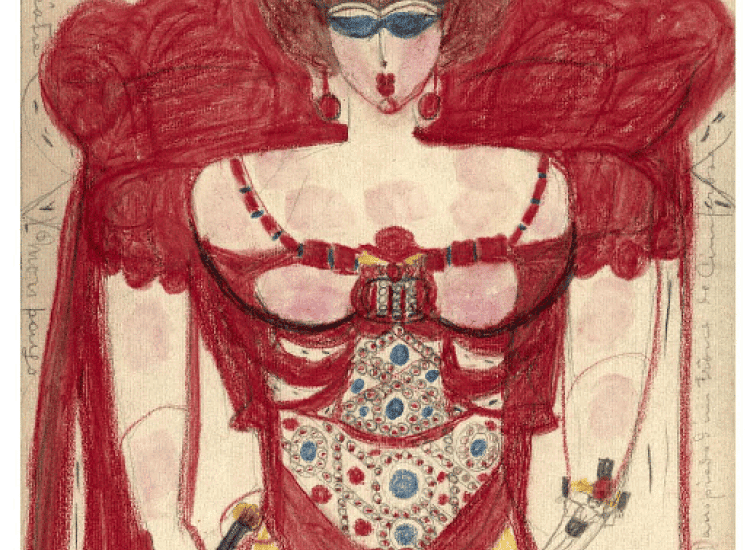 “One artist in the Collection whom [Jean] Dubuffet [founder of the term “art brut,” and champion of art by “outsiders” such as psychiatric patients, convicts, and children] came to know well was Aloïse Corbaz (1886-1964), an inmate of a mental hospital near Lausanne, whom he first met during his initial visit to Switzerland in 1945. Her work has generally been exhibited under her first name only, a common practice in early exhibitions to give anonymity to mental patients. She had an educated and cultured upbringing, and worked as a private teacher, which led her to the court of Kaiser Wilhelm II (as tutors to the daughters of his pastor) in the years before World War I. From a distance she became infatuated with the monarch and was unable to cope with her overpowering feelings. On her return to Lausanne she was overcome by psychiatric disorders, perhaps the result of long-standing problems worsened by this emotional upheaval. She was admitted to hospital in 1918, never to live outside an institution again…”

“Dubuffet wrote: ‘She was not mad at all, much less in any case than everyone supposed. She made believe. She had been cured for a long time. She cured herself by the process which consists in ceasing to fight against the illness and undertaking on the contrary to cultivate it, to make use of it, to wonder at it, to turn it into an exciting reason for living.’”

–from Raw Creation: Outsider Art and Beyond, by John Maizels, pp. 45 and 47