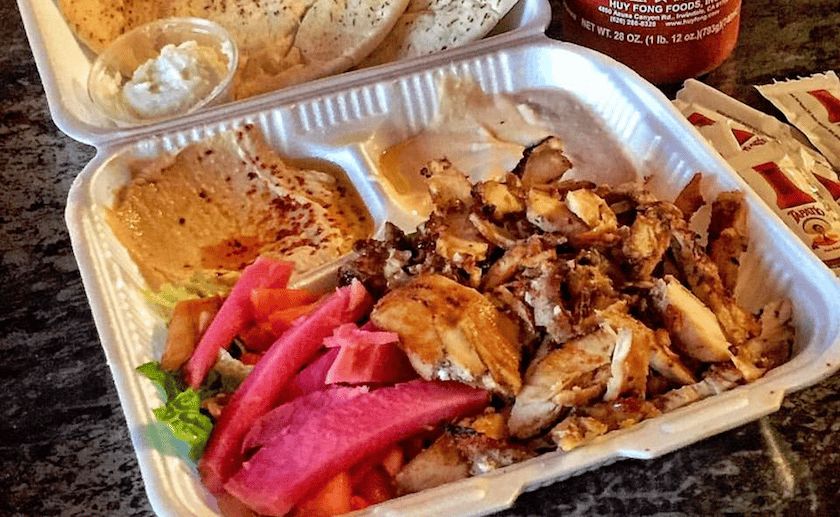 Jons Grocery is a subject unto itself, but you haven’t really lived until you’ve been to Zankou Chicken. I’m talking the original location of course, in a grungy strip mall on the northeast corner of Sunset and Normandie. The one with the parking lot full of surly Armenian cab drivers and triple-parked cars. The one so redolent of the luscious smells of roast chicken and juicy glistening shawerma that you should have to pay just to stand in line. The one where the garlic sauce–a seemingly mild but über-potent white paste, the exact composition of which remains a fiercely-guarded secret and which no living person, man, woman, or child outside the Iskaderien family has yet been able to parse–all began.

But it’s never really about the food, or only about the food. It’s about the layers of meaning and memory above, below and running through the food. When I go to Zankou I don’t just go for the chicken or the garlic sauce.  I go thinking of the dark underbelly of the immigrant dream. I go knowing that in 2003, spurred by family rivalries/resentments and the fact that he was dying of cancer, the scion of the franchise came home one night, pulled out a 9mm semiautomatic Browning, and shot to death his mother, sister, and himself. I go thinking of journalist Mark Arax, who wangled his way into the bosom of the Iskenderian family and wrote an essay called “Legend of Zankou” (which you can read in his West of the West).

I go thinking of Jonathan Gold, Pulitzer Prize-winning food writer and LA treasure who, via some long-ago column, no doubt turned me on to Zankou in the first place. Though we’ve never actually spoken, I (along with probably much of the rest of the city) feel I have a history with Jonathan. JG turned me on to Vim’s on 8th and Vermont (greasy-spoon Thai), Dow Show (which morphed into Heavy Noodling, which morphed into JTYH in Rosemead) (insanely delicious Shanxi knife-cut noodles), and the Hong Kong Deli (pork chop rice, dim sum).  He wrote a piece after the 1992 riots that moved me to tears. I once attended an ALOUD event at the downtown library in which he took part.

Afterwards I approached the stage trembling, clasped my hands before my heart, like St. Thérèse of Lisieux appealing to Pope Leo XIII that could she please, please Your Eminence, be allowed to enter the cloister at Carmel at the age of 15, and croaked, simply, “Thank you.” Gold responded with as much graciousness as any human being under the circumstances could have been expected to, which was to say “Heh-hey, okay then,” and back very, very slowly away.

Arax and Gold are excellent writers because 1) they clearly work like pack-horses and 2) they are rooted in a sense of place.  In another West of the West essay, Arax describes how, driving the back roads of the San Joaquin Valley, he once “knocked on the door of a tarpaper shack that seemed lifted right out of the Mississippi Delta, circa 1930” and discovered James Dixon, a 95-year-old tenant farmer and one of the last of a dying breed of “black Okies” who had migrated to California in the ‘40s from Arkansas, and Texas, and Louisiana and lived in  abject poverty ever since.

Gold, famously, for awhile in his early 20s, “had only one clearly articulated ambition: to eat at least once at every restaurant on Pico Boulevard.” Pico is not, at first glance, one of L.A.’s most promising thoroughfares, but that he managed to mine its riches and discover a universe in the process was exactly the point. “Pico, in a certain sense,” he observed of the experience, “was where I learned to eat. I also saw my first punk-rock show on Pico, was shot at, fell in love, bowled a 164, witnessed a knife fight, took cello lessons, raised chickens, ate Oki Dogs and heard X, Ice Cube, Hole and Willie Dixon perform (though not together) on Pico.”

From 2500 miles away, that little container of garlic sauce reminded me that in Los Angeles, I had walked my own unpromising streets, pondered my own questions, developed my own passion for uncovering its mysteries. I’d gone away in part to write, but that single superb sentence of Gold’s reminded me that if it’s never only about the food, it’s also never only about the writing. It’s about streets, neighborhoods, heart. I needed to come home. So I came home, and I haven’t stopped writing since.

Which brings me back to Zankou. Go.  Have yourself a Styrofoam container of juicy chicken or shawerma or falafel. Rejoice that the Iskenderian family is back on its feet and opening Zankou outlets all over Southern Cal. Groove on the pickled vegetables: saffron yellow, turmeric orange, sumac purple. Get juice on your chin. Wipe your greasy hands on your pants. Eat deeply of the garlic sauce. Descend into the garlic sauce. Maybe, though it hasn’t to anyone else, it will yield its secret to you.