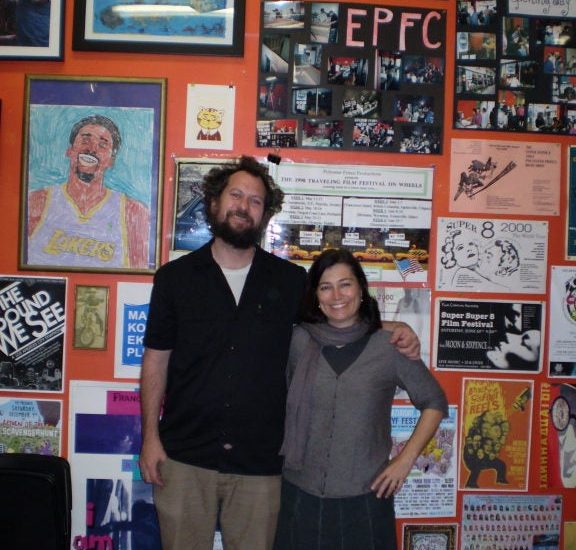 I’d done a bit of radio work, but to say I knew nothing about movie-making would have been an understatement. The first class I drove from Koreatown to Sunset and Alvarado and met my friend Patrick, who had also enrolled, at the Downbeat Café. What did a “movie camera” even look like? I wondered. Would I be able to lift it myself?

Luckily, Paolo Davanzo and Lisa Marr turned out to be experts at making neophytes like me, and the other seven students, feel at ease.  They began by screening clips from some of the earliest documentaries—an El ride, the inside of a factory—subjects that, encouragingly, were just about my speed. Our assignment for the course, we learned, would be to make a 10-minute film based on family or community.

I knew instantly who I’d choose for my subject:  Emil von Hueppner, the 78-year-old flamboyantly gay man with a deeply erratic temperament who’d lived in the townhouse apartment downstairs from mine for 47 years. Emil and I had enjoyed a rocky relationship over the last decade-plus, but were currently on speaking terms, so I figured I’d strike while the iron was hot. I’d call it “The Good Neighbor.”

Lisa was organized, whip-smart, and kind yet brisk. Our first assignment was to write a treatment. Our second was to nail down a shooting schedule. The third week she passed around digital camcorders, earphones, tripods and mics, showed us how to use them, and sent each of us home with our very own movie-making kit.

My own kit sat in a corner of the living room for days while I worked up the courage to start. I was sure I’d either break something or be utterly unable to, say, turn on the camera.  The day of the shooting, the tripod wobbled, the stray cats in the courtyard got tangled in the mic cable, and the first time I hit “record,” I suddenly understood those “primitive” cultures that believe the camera steals part of a person’s soul. How could I be so bold as to commit “reality” to film—to shape, shoot, tell a story that had never been told before and could never be told in quite this way again? The cables eventually got untangled; Emil, always a wild card, was on his best behavior; and somehow, miraculously, I got my hour and a half of footage.

It was when Lisa first explained the basics of editing, however, that I seriously considered quitting the class. “What’s a “clipboard?” I sulked. “I’ll never catch on!”

Hunched over the keyboard, brow furrowed, heart lurching, endlessly cutting, re-arranging clips, making stills, I kept thinking, All this for a 10-minute film?  What kept me going was that all around the editing room, my fellow film-makers, just as nervous as me, were hunched over their keyboards. Standing quietly by, always ready to show someone for the 80th time how to plug in a firewire, import voiceover, or save crashed footage, were the steadfast Lisa and Paolo. And in the end, I’m not sure I’ve ever experienced a thrill quite like the thrill of seeing my first rough cut come together.

As the class drew to a close, we firmed up the date for the event to which were all looking forward with bated breath: the potluck première. Trolling the aisles at Goodwill the day before, I happened upon a three-quarter length leopard skin Bebé coat, forked over ten bucks, and knew I had my “outfit.” The next night I packed up my couscous salad, nervously donned my coat, and went downstairs to fetch the star of the evening: Emil. He was dressed to the nines—sable wrap, ruby earring—and toting his own potluck offering: a silver platter of salmon-and-cucumber tea sandwiches.

At the Center, a motley crew of friends, family and strays mingled for an hour.

Then Paolo took up his perch behind the projector, Lisa introduced us, and at last, the screening began. My film was up first. People laughed uproariously, I’m sure at my editing “skills,” but sitting there in the dark, I was so proud of my humble offering I almost started crying.  Just as exciting was seeing the finished work of the other students. Patrick had done a piece about his sister who was dying of cancer. Someone else had profiled Richard Neutra.

A third student had documented the block of Echo Park Boulevard across from Magic Gas. Afterwards, Lisa conducted a rousing Q and A.  The food was great. Emil held court throughout. But best of all, I realized as we were packing up to leave, the folks at the Echo Park Film Center had shown us that movie-making—all art, in fact—is about community-building, connecting, having fun.

Driving home with Emil riding shotgun, I kept thinking of my simple little film: no songs, no Ken- Burns-effect snapshots, I still couldn’t synchronize an audio track, without help, to save my life. But I’d actually cobbled together a story: about home, place, my treasured neighbor. “That was one of the most wonderful nights of my life,” Emil said as, back home, we parted ways at our doors. “We’ll remember it always,” I agreed.

Upstairs, taking off my leopard skin coat, I thought of Gloria Swanson in Sunset Boulevard. I felt something like that. Except that I was the same small person I’d always been. It was the movies that had gotten big. 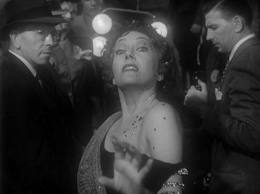