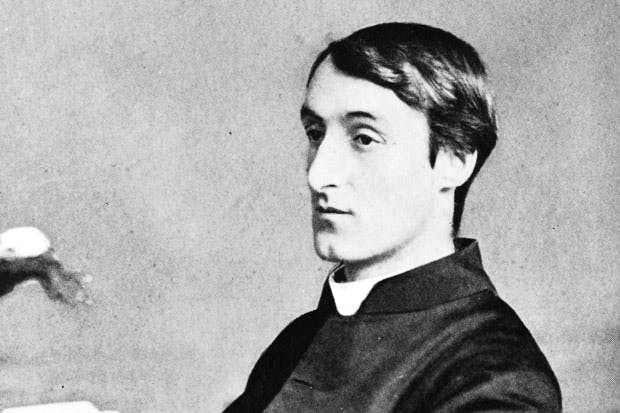 Gerard Manley Hopkins (1844-1889) was an English convert to Roman Catholicism and a Jesuit priest who wrote some of the most complex, astonishing, and wrenching poetry of the modern age.

In 1886, an Irish poet named Kathleen Tynan asked how it was that “a man like him with all his interest in art and literature had decided to become of all things a priest.” “You wouldn’t give only the dull ones to Almighty God,” he replied.

I also couldn’t help thinking, “What would the person whose passion is literature and art want to become but a priest”—in the metaphoric small p, catholic with a small c sense of serving as a mediator between the human and the divine?

Hopkins was in all worldly senses a failure. He was melancholy, sickly, small and pale. By his own admission he was an ineffective teacher of Latin and Greek (his job at University College Dublin) and an ineffective priest. He felt a stranger in Dublin, a stranger among his closest friends, none of whom remotely saw or encouraged his brilliance, and a stranger in his own skin. He carried a lifelong physical, emotional and spiritual torch for a man  whom he had met as an undergraduate; and by all accounts, he also remained a lifelong celibate. He suffered conflict, depression, darkness, and doubt. In 1884 he began a series that would come to be known as “The Terrible Sonnets” (“I Wake and Feel the Fell of Dark”…). Only a handful of his poems were published in his lifetime.

“What is my wretched life?” he wrote in his notes after a retreat, the year before he died. “Five wasted years almost have passed in Ireland. I am ashamed of the little I have done, of my waste of time, although my helplessness and weakness is such that I could scarcely do otherwise…All my undertakings miscarry: I am like a straining eunuch. I wish then for death; yet if I died now I should die imperfect, no master of myself, and that is the worst failure of all. O my God, look down on me.”

Hopkins was a genius. He’d earned the right to think of his years as wasted. The rest of us get to keep writing, keep striving, keep remembering that maybe our own sense of “helplessness”  arises from the fact that our work isn’t yet as good or as deep as it could be. And I, for one, also need to remember how  often great artists seem to be formed by great suffering. Flannery O’Connor and her lupus. Beethoven and his deafness. Gerard Manley Hopkins and the torment he experienced “both because of what he considered shameful about [the feelings in him stirred by the sight of male beauty] and, even worse in his eyes, because of his sadness and regret at never having fulfilled it.”

Hopkins died at 44, of complications from typhoid. His last words were “I am so happy, I am so happy. I loved my life.” But perhaps the reason he loved his life in the end was that he had consented, during it, to carry an almost unimaginably heavy cross.

Perhaps only a heavy cross could have produced lines like these:

And for all this, nature is never spent;
There lives the dearest freshness deep down things;
And though the last lights off the black West went
Oh, morning, at the brown brink eastward, springs—
Because the Holy Ghost over the bent
World broods with warm breast and with ah! bright wings.

4 Replies to “SEND MY ROOTS RAIN”