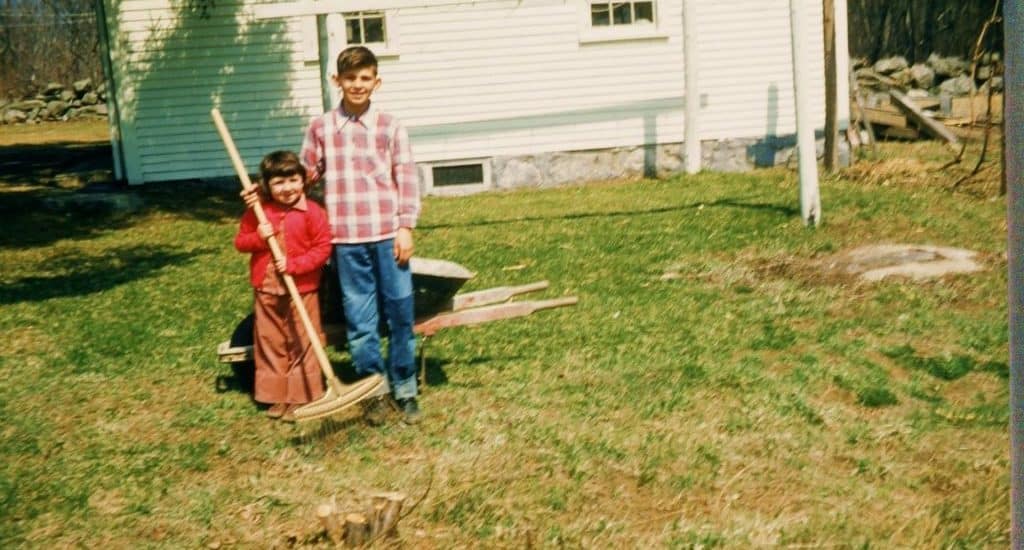 MY BROTHER ALLEN AND ME, SEVERAL YEARS AGO, RYE BEACH, NH

L.A. is the last place I ever thought I’d end up. Though I’d never felt particularly at home in New England, back in 1990 L.A. seemed more of an idea—a really bad idea—than an actual place. My older brother Allen, who’d been a building contractor in Manhattan Beach for 20 years, seemed to bear out my worst suspicions. Whenever he came back East to visit, he went around in his Bugatti shades and hundred-dollar haircut saying, “Everything’s so small! Everyone’s so fat!”

What a snob, I used to think.

As it turned out, Allen was the main reason my husband Tim and I ended up moving to L.A.At the time, we were living on Boston’s North Shore, Tim was a carpenter, and I was trying to work up the courage to 1) start using the law degree I’d earned in an alcoholic blackout; 2) start writing; 3) start over. When we got married in 1988, Allen gave us week-long round-trip tickets to L.A. as a wedding present.

It was sweet of him to invite us stay with him and his (now ex-) wife in Manhattan Beach, but we felt lost among all those perfectly-toned women with ponytails hanging out of the back of their Gold’s Gym baseball caps, all those jocks with white teeth and chiselled biceps who looked like extras from Hawaii-Five-O. Everything about us seemed inadequate for L.A., or at least that part of L.A.: we didn’t care enough about what kind of car we drove, didn’t like to shop enough, weren’t perky and upbeat enough. Still, Allen kept urging us, “You should move out here. The weather’s beautiful. There’s tons of money. I’ll even give Tim (who is now my ex-husband) a job.”

Almost everything about Los Angeles seemed wrong but we came anyway. Maybe it was the birds-of-paradise and Mexican sage and bougainvillea, maybe it was that we both knew there weren’t that many more years in which we might have the energy and impetus to make a major move, maybe in the end it was the light: so seductive, so beckoning, so full of hope.

When we first moved, to a rented house in the Culver City neighborhood of Palms, I got a load of the cars shining in the driveways, the shady green lawns, and the first night propped my bike against an angel-pink oleander in the side yard and went to bed. The bike was gone in the morning, of course, a perfect introduction to the trompe l’oeil contradictions with which every Los Angeleno resides, and that even now keep me wondering from second to second whether I am living in heaven or hell.

This sense that appearances are deceiving, that a level of reality exists beyond anything my senses could observe, turned out to be a recurring theme. The woman with jungle-red nails and stiletto heels turned out to sing in the church choir, the teenager on the bus bench with a serpent tattooed on her neck was bringing soup to her grandmother, the black guy who looked like a pimp was a hospice nurse, the Vietnamese guy who looked like a hospice nurse was a crack dealer. South-Central (as it was known back then), which I had always pictured as a bombed-out crater surrounded by razor wire, consisted largely of quiet residential streets lined of charming bungalows.

After a couple of years, we moved to a gorgeous French Normandie courtyard apartment in the middle of insanely crowded Koreatown: a neighborhood so full of mesmerizing contradictions that it would be another 18 years before I’d move again.

I’ve learned not to let quiet residential streets and bird-of-paradise bushes—wherever they’re located—lull me into a false sense of security. But I’ve also learned that the opposite of security is not necessarily danger: it’s risk, letting go, opening up to the city’s vaunted, and in my experience entirely merited, sense of possibility.

As I crawl in a sea of 101 freeway traffic on a Friday afternoon, quiver like an atom in the molecule of a packed Hollywood Bowl, tilt through the noxious brown sky on a return flight into LAX—peering out the airplane window stunned to think that somewhere in that endless, dun-colored grid are my apartment, my bed, my toothbrush—questions like these rise constantly to mind: isn’t it by the merest chance that in this chaotic megapolis I’ve somehow managed to find a place to live, my way as a writer, friends who can stand me?

Isn’t it at least a minor miracle that the vast majority of us get through any given day without being hit by a car, shot by a stray bullet or struck by a toppling palm tree? Isn’t it only a short step from there—the consistent avoidance of the cataclysmically bad—to the notion that it is just as likely that a stroke of good fortune will come one’s way?

Living so close to Hollywood doesn’t hurt any in promoting this cockeyed optimism. Inch for inch, L.A has to have some of the most beautiful people on earth: security guards who look like Errol Flynn, carwash cashiers built like Marilyn Monroe. The cornucopia of cultures, the outsized weather and mutant vegetation, the gorgeous bodies combine at times to impart an almost ludicrous sense of abundance. But, as with every other good thing in life, there’s a downside, too. I still dream of New England: the fields of cows, the old barns, the lilacs in spring.

But nowadays when I go back, I can’t help myself. Everything’s so small, I think sadly. Everyone’s so fat.

3 Replies to “EVERYONE’S SO FAT”